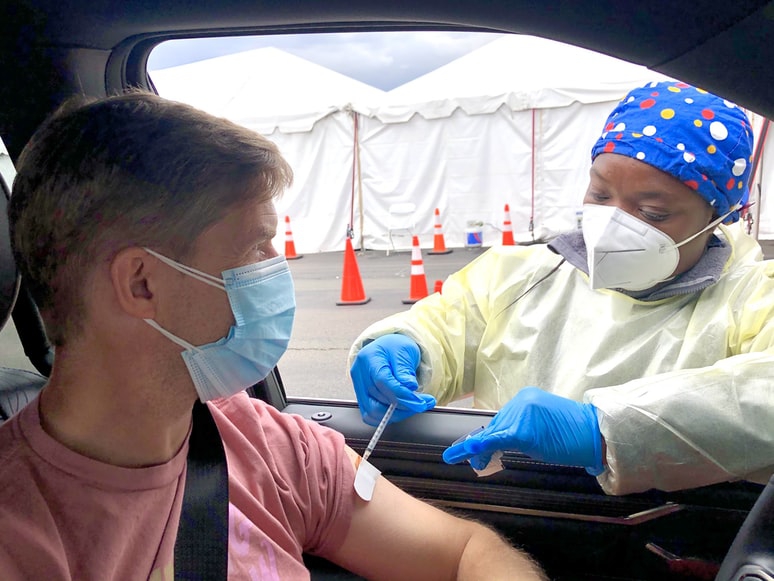 A recent survey reveals that vaccine acceptance among White adults has dropped from 56 to 52%. (Photo by Alex Mecl on Unsplash).

Vaccine hesitancy takes on a whole new dimension in SA

Vaccine hesitancy in South Africa can no longer be defined as an unwillingness to vaccinate. According to experts socio-economic factors and limited access to vaccination sites are among the reasons why the country is in danger of failing to meet its target of vaccinating a third of the population by year-end.

As of yesterday, 11 560 623 South Africans have been fully vaccinated which accounts for 28.8% of the population – which leaves a long road ahead with the government aiming to achieve population immunity which equals 67% by 31 December.

The survey, conducted by the Centre for Social Change and the University of Johannesburg (UJ) in collaboration with the Human Sciences Research Council (HSRC), maps out race as one of the factors influencing one’s socio-economic position and eventual ability to access vaccination services easily.

It shows that vaccine acceptance among white adults has dropped from 56% to 52% while among black African adults, it has increased from 69% to 75%. However, 16% of white adults were more likely to be vaccinated compared with 10% of black Africans.

Vaccine acceptance has increased from 67%, at the beginning of the year, to 72% mid-year, indicating there is more to vaccine hesitancy than the unwillingness to vaccinate.

Safura Abdool Karim is a public health lawyer whose research and work are focused on using the law to improve health. She currently has a special interest in vaccine equity.

She said the overlap between inequality and vaccine uptake can’t be ignored when talking about vaccine hesitancy.

“There is significant inequality that existed before the COVID-19 pandemic, and the vaccine rollout has followed that inequality. Wealthy people who are insured and using the private health care system, who are living in urban centers, have a much higher vaccine uptake than those people who are living in informal settlements and are using the public healthcare system. It comes down to these inequalities and issues of systemic barriers to access to health care services,” explained Karim.

According to the survey, class factors have a strong impact on access to vaccination services.

Using medical aid to represent social standing, researchers found that there was a similar acceptance rate with people that did not have access to health insurance.

However, people with medical insurance coverage were twice as likely to have been vaccinated. The ownership of a car revealed a similar pattern.

No wheels, no vaccine

Members of the community of rural QwaQwa in the Free State, claim that it is difficult to reach vaccination sites because they are too far away and they cannot afford public transport.

Sello Mohale, a father of two teenagers, said that public transport to the nearest vaccination site costs him over R70.

“I don’t have money to go and vaccinate. I once heard a rumour that the local bus operator in Maluti was taking people who were going to vaccination sites and back for free, but I was told by the driver that it was a lie,” said Mohale.

Sipho Tshabalala, a local taxi driver, believes that some vaccination centres are not “pro-poor” because they do not make it easy for some people to access.

“At the stadium, they have a drive-through vaccination centre for drivers only. Not everyone from that area has a car,” he said.

Tshabalala suggested that more vaccination sites should be placed in community churches because others were too far away and difficult to access. “If you don’t have enough money for the taxi fare to travel the sites, then it means you will not vaccinate because these areas are too far from us.

Another resident, Machakale Mofokeng, feels the government should’ve brought the vaccines to the people and rather have had few sites.

Earning a living versus taking the jab

Professor Ames Dhai noted that it was important to consider the socio-economic factors that contribute to vaccine hesitancy.

“Do I put food on the table and go to work or do I go and get vaccinated? That’s what some people have to ask themselves and we know what the priority will be. Getting vaccinated is not a straightforward decision because they have to consider factors like the cost of traveling to the vaccination site, taking time off work, and possibly not being paid for that time off,” she said.

Dhai is the Founder and past Director of the Steve Biko Centre for Bioethics at the Wits Faculty of Health Sciences. She is currently a visiting Professor of Bioethics and Health Law at the Wits School of Clinical Medicine and serves as a Vice-Chair on the Ministerial Advisory Committee for COVID-19 vaccines.

Another worrying trend has surfaced – thousands aren’t returning for their second dose of Pfizer’s COVID-19 vaccine.

“The lack of vaccine confidence in the second jab showed by people not returning is a reflection of various aspects. The fear of the side-effects, not knowing what the components of the vaccines are, and the continued spread of misinformation that continues to escalate about the COVID-19 vaccine and intentions of government on social media and different social spaces,” said Dhai.

*Sonwabile Jonas has been working as a sales representative and cashier at a popular phone and computer gadgets store since the beginning of the pandemic in March 2020.

“I didn’t plan to get vaccinated because I still wanted to give it time and see how the side effects would affect other people. I eventually went after feeling pressure from work about the importance of being vaccinated since we work with customers. After my first jab, I had a headache and experienced flu-like symptoms for a few days.”

Jonas said he has been told by family members and friends that the side effects of the second jab are worse than the first.

“I heard that the second shot knocks you down. Social media definitely influenced how I feel because people have shared their experiences and it is common that people have experienced much worse side effects from the second,” he said.

Jonas currently has no plans to return for his second jab until he is forced to by his employer for example.

Taking the vaccine to the people

Dhai has suggested that the second vaccine be taken to the people as the government targets population immunity.

“SA’s multicultural diversity requires us to look at a wide variety of reasons that contribute to the levels of existing vaccine hesitancy and low vaccine uptake. We also have to consider that the majority of people in this country live below the poverty line. Looking at the socio-economic determinants, we can understand why people may not turn up for the second vaccine. And it would be good if the vaccinations can be taken to them through initiatives that bring the vaccine closer to people on the ground,” said Dhai.

Dhai acknowledged that the Department of Health had succeeded in encouraging people to get vaccinated through various campaigns but concluded that more initiatives and work needed to be done to help the government reach the magical mark of 67% of the population.

The Department of Health was yet to respond to follow-up questions at the time of publication. – Health-e News