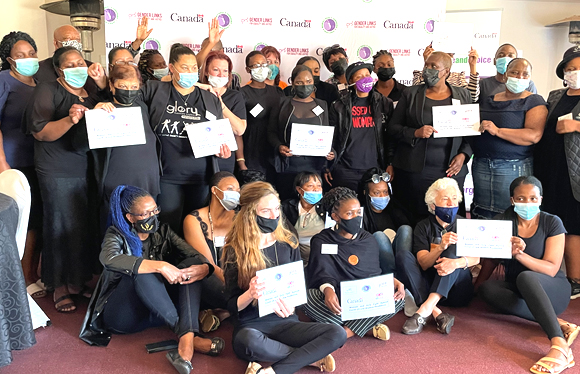 South Africa and the world will commence the Sixteen Days of Activism today on 25 November – International Day of No Violence Against Women. The Women’s Voice and Leadership partnership (WVL), coordinated by Gender Links, kicked off the annual campaign on 19 November, World Entrepreneurship Day.

Coincidentally, that is also International Men’s Day. We aren’t convinced we need a men’s day since every day is pretty much that. We are convinced that until women have equal, fair and just access to economic resources we will be winning the battle and losing the war against gender violence.

So what is new in 2021? Other than this being the second year of the COVID-19 pandemic – that has exposed this huge blight on our freedoms even further – earning gender violence the title of “twin pandemic” in President Cyril Ramaphosa’s family updates to the nation?

First, is the fact that gender violence is finally on the political agenda and centered in this way as a crisis and emergency. Second, is a National Strategic Plan (NSP) that, at least on paper, represents a complete paradigm shift from response to prevention.

Third, South Africa stands out globally as being one of the only nations to introduce a stand –alone pillar called “economic power” as part of its GBV strategy. Fourth, a new generation of young women are gatvol of hollow promises, finding new ways of organising on social media in very visible ways like wearing black every Thursday: not the UN’s orange; not for 16 but for 365 days.

Some quick herstory. In 2008, South Africa adopted a multi-faceted ‘365 Day National Action Plan to End Gender Violence’ under former President Thabo Mbeki. Soon after, Jacob Zuma, a serial philanderer and polygamist, swept in throwing gender discourse into disarray. This, of course, made the state an unreliable partner in the cause.

Fast forward to the global #MeToo campaign that started with Donald Trump’s election in the US; the 2019 South African elections that led to Zuma’s demise and the #TotalShutdown campaign that peaked in 2020 in South Africa.

SA women galvinised through social media, sat on the lawns of the Union Building on Women’s Day – demanding to see the new president. Poster faces for this campaign included a slew of young women brutally murdered by their intimate partners. South Africa, while having one of the most gender-aware constitutions in the world, also has the dubious distinction of having the highest rate of femicide in the world.

Women protestors said they would not be celebrating women’s month as they had nothing to celebrate. The hashtag movement formed itself into working groups that put forward 24 demands: one each for the then 24 years of freedom that the #TotalShutdown campaign said they could not call “free”for women.

A few month’s later, Ramaphosa convened the first ever Presidential Summit on Gender Violence. This delivered the National Strategic Plan on GBV and Femicide, which has just released its year one report. The report rues the fact that the multi-sector National GBV Council has not yet been set up. In the meanwhile a “collaboration” of government, business and NGO partners drives the work, with the #TotalShutdown reconstituted as the “Call to Action”. Together, they have raised R128 million for the GBV Fund as government departments scramble to identify the R21 billion that they have pledged to contribute to ending GBV in 2022.

There are other signs of hope. Before, the justice cluster plan for GBV started with response, support and then prevention, almost as an afterthought. Comparing the response to GBV to that on HIV and AIDS, activists argued that leadership and prevention must be put at the centre.

In over twenty years of gathering “I” stories or first- hand accounts of GBV, women have told us repeatedly that they stay in abusive relationships because they have no choice. The slogan “voice and choice” is meaningless to those who do not have the economic means to exercise their agency.

In early October, when President Ramaphosa opened the Women Economic Assembly to empower women (WECONA) he declared:  “The economic empowerment of women is one of the pillars of our NSP of GBV and femicide. By improving the economic circumstances of women, we are reducing their vulnerability to abuse and violence. By being less economically dependent on male partners, women have a better chance of leaving an abusive relationship.”

WECONA has its eyes on government’s commitment to ensure that 40% of all procurement ends up in the hands of women. This is an example of the more systemic approaches required to address the causes rather than the symptoms.

More must also be done to change the patriarchal attitudes that drive this pandemic. WVL comprises 51 diverse women’s rights organisations supported by a fund created by Global Affairs Canada as part of its Feminist Foreign Policy. In 2021, these partners conducted the South African Gender Progress Study (GPS), a gender attitude survey. This shows that while 52% of women and men agree that “women and men should be treated the same”, 43% agree that “a woman should obey her husband.”

Until women can claim their rightful place, even year-long campaigns will be turned into life- long campaigns. Next year, building on pioneering work by Gender Links on GBV indicators, the Human Sciences Resource Council will conduct the first-ever nation-wide study to track the extent, effect, causes, prevention, response and support to GBV. May these become tools to track real change!

(Colleen Lowe Morna is Special Advisor to Gender Links, responsible, among others, for the WVL-South Africa Fund.

Colleen Lowe Morna is Special Advisor to Gender Links, responsible, among others, for the WVL-South Africa Fund.