Home » Thrive by Five Index: Two thirds of SA children on the backfoot 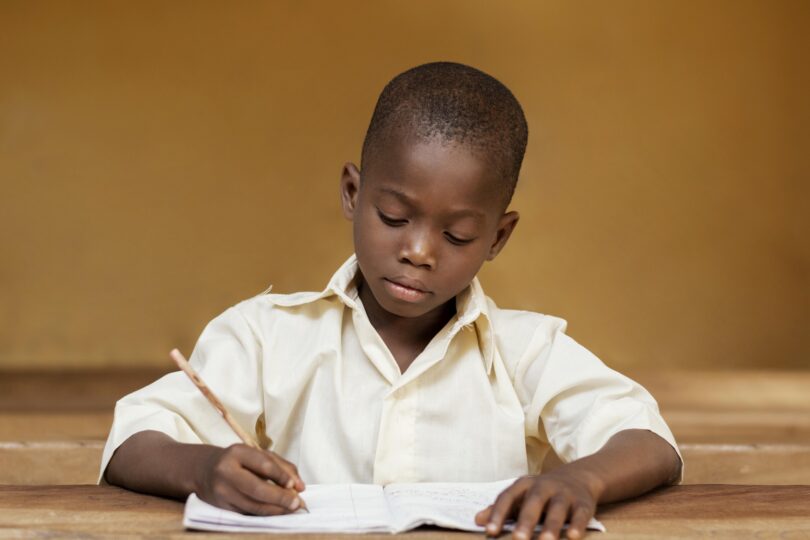 The Thrive by Five Index survey has revealed that 65% of South African children, not enrolled in early learning programmes, will struggle as they reach primary school. (Photo: Freepik)

Thrive by Five Index: Two thirds of SA children on the backfoot

A new survey, known as the ‘Thrive by Five Index’ has revealed that 65% of South African children, aged between four and five, are not able to meet the expected early learning and physical growth standards.

Despite being enrolled in Early Learning Programmes (ELPs), they will begin Grade R with a considerable disadvantage.

The Thrive by Five Index survey assessed over 5 000 children enrolled in various types of ELPs around South Africa. They were assessed in three areas: early learning, physical growth and social emotional functioning. These three areas give a good indication of a child’s performance at school.

Keeping track of a child’s development

The 2021 index is the first of a series of surveys that will monitor trends of four to five-year-olds attending ELPs.  Importantly, it aims to determine if a child is on track for their age in key areas of development.

It also stated that 55% of children attending ELPs are not able to do the learning tasks expected of children their age, with 28% of children falling far behind the expected standard.

The Thrive by Five Index is the biggest survey of preschool child development ever attempted in South Africa. Explore the data around learning, health, and social-emotional functioning.
Watch the launch live: https://t.co/SU0KQshQgd pic.twitter.com/n4EEbxrNhG

According to the Thrive by Five Index 2021 report, stunting is one of the stumbling hurdles among children.

“Stunted children, on average, perform worse at school and are more likely to be unemployed as adults. They are also at higher risk of getting diseases like diabetes and hypertension and are vulnerable to being trapped in intergenerational cycles of poverty,” indicated the report.

In terms of social emotional functioning, the index found that 27.5% of children did not meet the standard when it came to age-appropriate social relations with peers and adults. Meanwhile, 33.4% were found to not be emotionally ready for school.

“The combination of risk factors faced by young children in South Africa places some at a massive disadvantage. For example, a child of four years in the lowest income group, who is severely stunted, is developmentally one whole year behind a ‘normal’ child in the wealthiest income group when it comes to early learning,” the report stated. 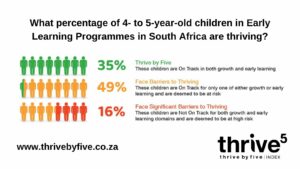 Minister of Basic Education, Angie Motshekga, welcomed the initiative and said it will play a key role in tracking the progress to improve child outcomes in the next 10 years.

“The Thrive by Five Index has truly thrown into sharp focus the importance of the work of Early Childhood Development (ECD) in moulding and shaping the nation’s future leaders,” said Motshekga.

She added: “Government spends almost 1-2% of annual  education budgets which covers ECD, reaching only 18% of children. So, there are huge problems around access and disparities which we have to address.”

Motshekga further stated that there is an urgent need to reduce the inequality gap between rich and poor kids.

“We have to tackle the injustice of inequalities in equal opportunities in early education spaces. And we must increase the percentage of SA’s children to thrive by five,” she said.

Sonja Giese, the project lead for the Thrive by Five Index, said South Africa must tackle the injustice of unequal opportunities in early childhood.

“SA will not realise its development goals of eliminating income poverty and reducing inequality, without addressing the significant challenges that young children face in their earliest years. We have to tackle the injustice of unequal opportunities in early childhood,” said Giese.

The survey was made possible by FNB and Innovation Edge, in collaboration with the DBE. The US Agency for International Development has also provided backing together with the ECD Measure. – Health-e News.