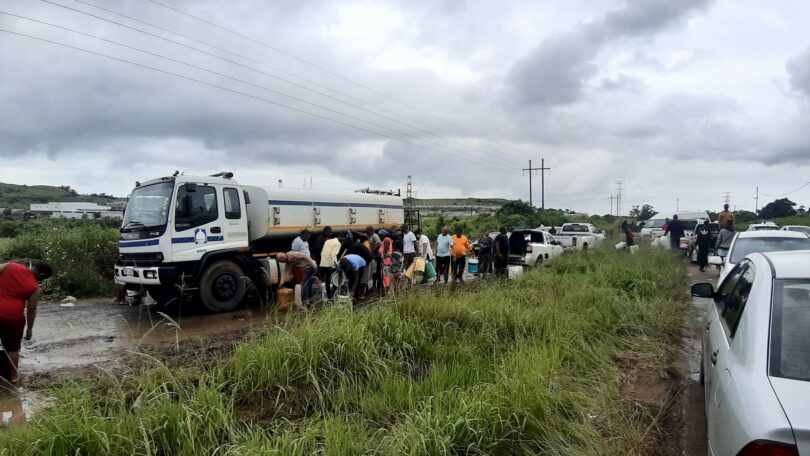 eThekwini residents have resorted to using dirty water from local streams following last week’s devastating floods in KwaZulu-Natal. Water infrastructures and roads were severely damaged, forcing community members to scrounge for anything they can get their hands on.

Although water tankers have provided temporary relief, they too are under severe strain with drivers still trapped and unable to get to work. This reduced capacity as well as empty reservoirs has placed a huge burden on the eThekwini Municipality to rectify the situation.

With no water coming from their taps, residents are using stream water which is often littered with diapers, sanitary pads and tissues. If this water is not adequately disinfected, it poses a risk to health. Contaminated water and poor sanitation are linked to transmission of diseases such as cholera, diarrhoea, and hepatitis A.

Gugulethu Mazibuko, an elderly woman who lives in Embo on the outskirts of Durban, is struggling to make do with the rations.

“I don’t know when last I washed my clothes, not to mention drinking water. Each household is only allowed three buckets of water when the tankers arrive,” she explained.

Mazibuko added: “The saddest is that these tankers only came once and never again. If we call the municipality, our councillors just give empty promises.”

She said that even if she lived next to a stream, she’d have to boil the water which means paying more for electricity.

Another Embo resident, Sibahle Chauke, is living with a disability. As a result, she is unable to fetch water when the water tankers do arrive.

“I usually send my children to go queue for water. After they have filled their buckets, I must hire someone to pick them up from the bus stops. The tankers normally stop at bus stops where I live so in the end, it seems like I’m paying for water,” said Chauke.

Zakhele Mweli, who works at a retail store, said the price of bottled water has shot up since the floods.

“It’s very difficult to live without water because we can’t do essential things like cook, bath and wash our clothes. We also can’t clean our house which is full of mud after the walls collapsed,” he said.

“I work at a supermarket as a cashier. It’s not often that I see black people buying water, but recently, they buy two or more 5L bottles,” Mweli added.

Soso Xulu isn’t keen on fetching water from the tankers after an unpleasant experience.

The Embo resident advised his wife and kids to not go and collect water since it had tadpoles in it the last time their area experienced water shortages. He has since made another plan – his wife collects water for them at her place of work.

“We are so lucky because my wife works for a kind family in Kloof as a domestic worker. They have been allowing me to fetch as many buckets as we need,” said Xulu.

Working around the clock

The Ethekwini municipality issued a statement informing the public that their teams are working tirelessly to ensure water is restored.

Water tankers have been dispatched to areas which are inaccessible in the interim.

Their hard work has paid off. This evening taps started running in some parts of Waterfall after a week-long outage. Teams are busy in other parts of the city to repair water infrastructure as quickly possible. pic.twitter.com/ygLMkAgtNn

“The EThekwini Municipality has increased the allocation of tankers to supply water to communities. We are working with ward councillors to facilitate provision of water tankers to communities,” the statement read.

Lindiwe Khuzwayo, eThekwini Municipality Head of Communications, said communities are urged to contact their councillors if there are any tanker-related problems.

They also informed the public to report any water faults such as burst pipes and leaks. Residents are encouraged to send photos, with the location, to the municipal Whatsapp number 073 148 3477.

The Ethekwini Municipality confirmed yesterday that taps have started running in some parts after a week-long outage. – Health-e News