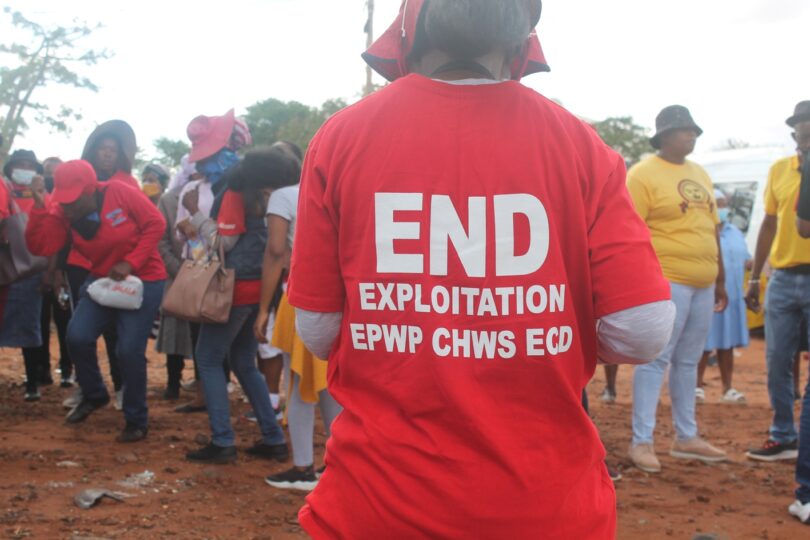 ECD workers are up in arms following the DBE's failure to secure their futures through permanent positions. (Photo: Montsho Matlala)

A number of Early Childhood Development (ECD) workers feel abandoned by the Department of Basic Education (DBE), with no prospects of permanent employment.

Their discontent follows President Cyril Ramaphosa’s announcement that as from 1 April this year, ECD functions are now under DBE control. They previously fell under the Department of Social Development (DSD).

Although they initially embraced this switch, the uncertainty has left many of them asking questions.

Dikeledi Aphane, 56, who runs a creche at Lefiso village in Mpumalanga, said that ECD workers were neglected despite their important contributions towards building a future society.

“I am getting older every year without government benefits. And yet, I help children become good learners, students and later, productive citizens. Why is the government able to pay the R350 COVID-19 relief money, but we as ECD practitioners, aren’t recognised?”, asked Aphane.

“We are under the DBE now – as we have been demanding since the inception of the democratic government. Just a few days ago, the Limpopo Education Department told us to continue submitting our financial claims to the provincial DSD. This really dampens our spirits. We thought the DBE was going to address all our problems including permanent and regular salaries and benefits,” said Kubjana.

“At our centre, we rely on stipends. We are eight workers earning between R1300 and R2000 per month. The money from parents covers food but it is still difficult because most of them can’t afford school fees,” she added.

The 52-year-old explained: “I was first happy with the migration but now I am crying. The DBE has left us in the cold with no salaries or benefits.”

There are over 10 000 ECD centres in the country and the majority of them are registered with the SA Congress of Early Childhood Development (SACECD).

“ECD is a holistic approach to the development of the child, educationally, socially, spiritually, emotionally and physically,” he said.

Like Aphane, Kubjana and Malaka, Saul said most ECD workers don’t have fixed salaries. Instead, they rely on stipends which range from R500 to R3000 and are paid on an irregular basis. They are paid through non-profit organisations (NPOs) who are often in arrears with their payments.

Saul added that the SACECD was lobbying the DBE on subsidy increases per child as well as basic conditions of employment.

“Time will tell as the DBE hasn’t given firm responses to date. This is causing anxiety among our practitioners,” he pointed out.

DBE spokesperson, Elijah Mhlanga, said it was too early to measure the progress of the migration processes accurately. He said there were, however, systems in place.

Mhlanga also cautioned that floods in KwaZulu-Natal might have some negative impacts on ECD processes in the province.

Nkakarng Rakgoale, the DSD MEC in Limpopo, said the department would still be available for ECDs despite the migration.

“The DSD will remain responsible for the functions related to social support and care within ECD programmes,” said Rakgoale.

Limpopo Education MEC, Polly Boshielo added: “We all have a stake in the essential work that must be done for our children to reach their maximun potential.”

“We are happy that the teaching of children will be monitored by the DBE. Now we need ECD practitioners to be employed permanently with full benefits such as pension fund, UIF and paid leave,” said Phalakatshela.

According to the SACECD, most practitioners possess either legacy or academic qualifications. – Health-e News