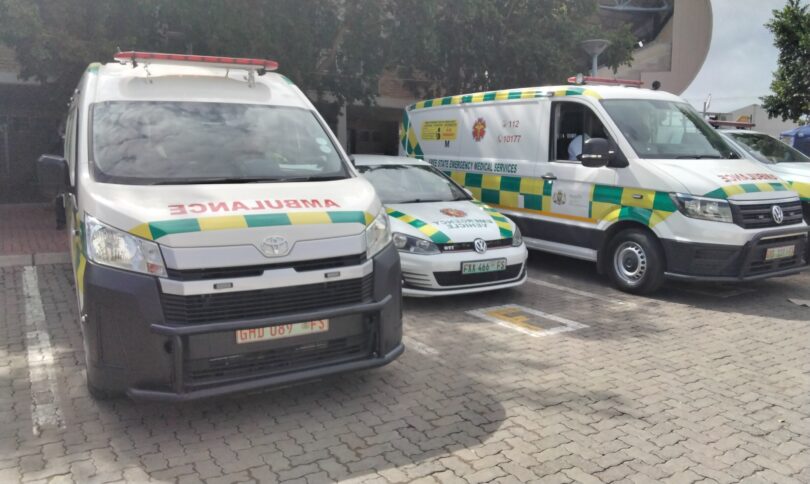 “According to the ratio in the national health guidelines, at least a single ambulance should serve 10 000 people, and in the province, we are serving thirty thousand people,” she said.

The MEC explained that the new fleet that was recently acquired wasn’t added to the existing one because it was being phased out.

“Many people say we are buying a fleet of ambulances, yet we cannot serve them. The truth of the matter is that Free State doesn’t have ambulances. We have a fleet of old ambulances we let go of when we get new ones. That is why we don’t even meet the ratio,” she added.

‘People in rural areas get help’

“With our conditional grant, we cannot buy ambulances because of national government restrictions. We, however, feel confident that although we have ambulance shortages, our people staying in rural areas and farms get help quickly when they need ambulances,” said Tsiu.

Lizzy Growler, who stays on a farm in Bainsvlei, Bloemfontein, believes Tsiu is underperforming as a MEC.

“The Free State people cannot access emergency services from the government. We can wait up to 12 hours for an ambulance or not receive any response. Not too long ago, we lost our neighbour who died after an ambulance failed to arrive in time,” he said.

Earlier in Henneman, a pregnant woman’s ambulance overturned due to the poor state of the road. The MEC confirmed the replacement of the ambulance to the community.

“With regards to the accident, we have replaced the ambulance by taking another one from another station. We are hoping to buy some, but as I’ve indicated, we are replacing the old ones or those with problems,” she said.

Keabetswe Selai is a young mother waiting to welcome her second child. She had to be transported to Moroka Hospital in Thaba Nchu by a private car after the ambulance took over five hours to reach her. She said she had a false alarm and was left to deal with labour pains for hours without assistance.

“I had to look for a car to take me to the hospital. After hours of waiting in agony, I decided to use a private car. They told me the ambulance eventually arrived but I was already at the hospital,” said Selai.

As it stands, there are now more mobile clinics in the Free State. The department has also defended its decision not to hire emergency personnel.

Tsiu told Healthe-news: “Our budget is inadequate to enable us to do all we have to do. That is why we prioritise some key issues. We acknowledge that we do not have enough.”

The Parliamentary Social Committee members who visited Free State early this year have since called on measures to help the ailing system. The Free State is overwhelmed with unemployment and migrants trying to start a new life due to worsening situations in their countries.

As the festive season looms, the province is facing some tough decisions. It is reported that over 20 ambulances will be dispatched on the roads ahead of heavy passing through traffic.

A resident from Botshabelo, Thabo Lepoma, said that the deployment of ambulances on the roads was unnecessary.

“Government should deploy traffic police in numbers instead of opening stations. What will happen when people need ambulances, and they aren’t stationed close enough?” she asked.

Health-e News has learnt that there is a fleet of over 20 ambulances at the government garage, some new, some old. It was also reported earlier this year that the department was dragging its feet in appointing additional emergency staff.

According to Be Positive, an NGO advocating for patients’ rights, each ward is supposed to have its own ambulance.

Found Moshe Makamole said it is sickening to wait for one, knowing it won’t arrive.

“The Free State Health Department’s failure to procure ambulances is pushed by ignorance and lack of courage to provide services. You can’t have a province where new ones are given to rich areas and the poor have to wait four hours. We have engaged the MEC to prioritise resources, and so far, we can’t say she is doing that,” he said.

According to Jermain Leseme, a nurse at a local clinic, the delays in ambulances were caused by workers who are not passionate about their jobs amid a drop in overall morale.

“It is uncalled for that a patient can wait up to eight hours after calling for an ambulance,” she said.

“How can Botshabelo, a place with over a million people, only have one ambulance? This is an intentional deed by the management to kill our people. Government should buy new ones and fix broken ambulances. The ration is anti-poor because it means our lives are compromised,” he said.

The government was accused of delaying emergency response following a gruesome accident between a bus and a truck where nine people died on the N8 near Botshabelo. Since the controversial multimillion rand ambulance services tender was abolished between Buthelezi ambulance services and the Free State Department of Health, there seems to be no plan to turn the ailing services around.

Tsiu promised the procurement of more ambulances in the next financial year. Until that happens, over 30 000 people will continue to share a single ambulance.

“If you visit our station, you’ll see ambulances that are broken, vandalised or waiting to be fixed. We use the same ambulance as a team when attending to calls during our shifts. When calls come in simultaneously, we have to wait for the ambulance to return,” he said.– Health-e News