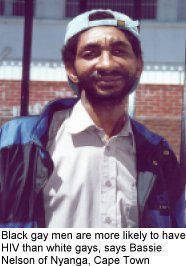 There are many men in South Africa who have sex with other men but don’t consider themselves “gay”. In the absence of funding for research, the extent of HIV infection among homsexual men in South Africa is largely unknown. But recent research conducted by the Triangle Project in Cape Town shows that risk-taking behaviour among gay men in the Mother City is alarmingly high. Jo Stein reports.

Worldwide HIV infection rates are much higher among homosexual than heterosexual men and this may be as true in South Africa as it is elsewhere, according to a recent study.

But with the largest heterosexual epidemic in the world, South Africa is paying little attention to the relatively small group of homosexual men who are thought to be at even greater risk than the general population.

Dr Nono Simelela, Chief Director of the Directorate HIV/AIDS and STDs, points out that the new operational plan of the AIDS Directorate includes gay men, but in the context of a national HIV infection rate of over 22%, all South Africans are a high risk group. Simelela is clear that the priority target group for HIV prevention in South Africa is youth.

“We do work specifically with homosexual men as well as targeting men in general and we target men in jails where men have sex with men. But if you ask me where we are putting our money in terms of risk; it’s with the youth,” says Simelela.

Gay activists argue that this is unacceptable as specific interventions in South Africa have targeted other high-risk groups like commercial sex workers, migrant labourers and truck drivers.

According to Gary Adler, executive director of the AIDS Foundation in Durban, the vast scale of the heterosexual epidemic is not the only reason for government’s failure to develop adequate HIV/AIDS prevention initiatives for homosexuals as opposed to other high-risk groups.

Part of the reason, says Adler, is the widespread denial that homosexuality exists within the black South African community.

Dawie Nel of the Pretoria gay organisation OUT, argues that the emphasis of official interventions is on poverty and race as the major risk-factors for HIV.

But poverty and race may influence gay HIV infection rates just as much as they do heterosexual ones.

Recent research cited in the Mail and Guardian reported HIV seroprevalence rates of 33% among black gay men in New York. This is much higher than their white counterparts, of whom only 2% were infected.

Black men who have sex with men in South Africa are also likely to be more vulnerable to HIV/AIDS infection than their gay white counter-parts, says Bassie Nelson, a gay man living in Nyanga, Cape Town.

Nelson isn’t HIV infected, but he wonders whether the day will come when he’s the only one in his group of township friends who isn’t.

“Black gay men are at higher risk of HIV than white gay men because the township lifestyle is the party life.”

“And when picking up someone at a shebeen, there’s no negotiation about safer sex because its all secret and quick, there’s no time to waste and you won’t see him again. For us, it’s a double battle and double discrimination. Being gay is seen as being un-African and HIV brings even more stigma,” says Nelson.

In the absence of funding for an objective sero-prevalence survey where anonymous blood samples are taken from a representative sample of the homosexual population, accurate infection rates among gay South Africans remain unknown.

Nevertheless, Boxford’s Cape Town study, which was not an objective sero-prevalence survey, makes it clear that a problem exists – 8% of those men who tested for HIV were found to be HIV positive.

At first sight, this figure does not appear all that high. But Boxford’s city bowl sample was mostly white men (62%) and over two-thirds of the sample were educated to diploma level or above.

Boxford argues that the figure of 8% is the lowest possible estimate of actual infection rates, even in this group.

“Risk-taking behaviour suggests that actual prevalence of HIV among this group of gay men is much higher than the 8% who actually know that they are positive,” says Boxford.

Gay infection rates in Cape Town are unlikely to be lower than those in cities like San Francisco and New York, argues Boxford. And they may well be higher – if only because first-world cities have had ongoing and large-scale safer sex educational drives specifically targeting gay men.

In the United States, the Centre for Disease Control has established that 40% of HIV infected Americans is gay. Here in South Africa, in the absence of hard data, it is difficult to motivate HIV/AIDS prevention programmes for homosexuals in particular.

This results in denial about the risk of HIV infection even within the openly gay communities reached by Triangle and OUT.

“Many gay men tell us they’re HIV negative, but they’ve never even been tested,” says Boxford.

OUT and Triangle are lobbying for a seroprevalence survey so that accurate infection rates among gay South Africans can be established.

But some argue no statistics are needed to tell us that gay men, like other marginalised and at-risk communities, should be specifically targeted in HIV prevention efforts.