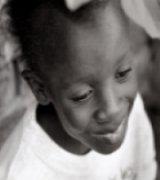 Nkosi Johnson is in a semi-coma at his home in Melville, Johannesburg. During his 11years, the soft-spoken but determined little boy who was born with the HI virus has achieved more than many do in a lifetime. He has addressed world conferences, fought and won the right to attend his local school and established a haven for HIV positive mothers and children in Johannesburg. In July last year, on the eve of the 13th International Conference on AIDS in Durban, Health-e interviewed the young boy about his life, his hopes and his dreams.

The red ribbon pinned to his windbreaker is the first thing you notice. Then the wide smile, the huge, deep-sunken eyes and his incredibly frail body.

Nkosi Johnson (11), touted for many years by the media as one of the longest HIV survivor in the country, is ill.

In fact, the disease that was passed on to him by his mother at birth is ravaging him. AIDS has reduced his body to nothing more than skin and bone.

“I’ve heard. My mother [foster mother Gail Johnson] has told me that heaven is a very happy place. My [biological] mother is in heaven.

“I think heaven is a nice place. I think I will be a handsome guy and I will see my mother. I think we’ll dance,” he says with a resolve that almost seems out of place coming from such a young child.

But in the next breath his apparent acceptance of death disintegrates: “In many, many years I’ll see my mom in heaven, but I don’t wanna die now.

“The worst thing is that I get sick, badly, from the diarrhoea. I’m scared I’m gonna die, that I’m not gonna live.”

Nkosi Johnson became one of this country’s most famous HIV positive children when his foster mother enrolled him at a primary school in Melville, Johannesburg.

A “Mother Theresa” for many homeless women and children living with HIV/AIDS, Gail disclosed in Nkosi’s application form that he was HIV positive.

This led to an outcry among some parents, but Nkosi’s case forced the Gauteng Education Department to draw up a policy document to deal with similar cases in future.

A “normal kid” in all aspects, Nkosi loves eating pizzas and McDonalds hamburgers and talking about BMWs. He thinks girls are “strange” and he loves his teacher and friends at Melpark Primary.

“My life has been a good experience, but the one sad thing is my mother died and I don’t like that. But that’s how life is,” says Nkosi, who is increasingly asking questions like “what happens when you die” and “why am I sick”.

“I try not to wonder why I am sick and not some other child. This is what I know, I think. All people get sick, no matter what it is. Because there are diseases, you can get sick. Like cancer or Sydney flu.”

Is he afraid of falling asleep and never waking up?

“I don’t really dream anymore, I just fall fast asleep. Once I had a bad dream that I would die, but I told my [foster] mother and she said, ‘no, not you’. She asked me ‘do you want to die?’ and I said no.”

Nkosi says he may become a doctor when he grows up. He definitely wants to alleviate some of the suffering caused by the epidemic.

“It is sad to see the other sick people at the hospitals. I wish all the people in the world could be well.”

Despite the high level of stigmatisation of HIV/AIDS and discrimination against people living with AIDS, Nkosi has a loyal following of friends.

“There is not much discrimination. They like me, they know I am sick – they support me. They ask me if I am sick and I say don’t ask me that question, it upsets me.”

Although he is so young, Nkosi has very definite opinions about AIDS and recently accompanied Gail to New York to raise funds for homeless women and children living with HIV/AIDS.

“Like in New York and all over, they don?t have as many as we have here. It’s sad when babies die. Because they’re small little babies and they’re dying, they don’t even get to live their life. This is why they must make a cure, quickly and fast,” he says.

Would he do things differently is he was the health minister?

“I would buy a big house where lots of people can live and look after themselves, where they could work. My mother died and she was suffering. She had no work and we had no place to stay.”

Nkosi is clear on what his message will be when he takes the podium on July 9 (2000) as one of the opening speakers at the AIDS 2000 conference.

“Support, love, care for them and help them, look after them. No matter what, you can’t die by touching them. And I’ve always know this, all my life?”

Nkosi Johnson talks to the world, an audio profile by Sue Valentine