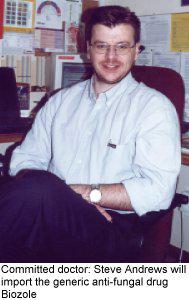 A few weeks ago, the generic drug, Biozole, was successfully tested and found to be a valid equivalent of the anti-fungal medication, Fluconazole. This fulfils the conditions required by the Medicines Control Council before it can grant a Section 21 exemption that will allow Biozole to be used as a valid generic for specific purposes. Provided the exemption is granted, Biozole will be imported from Thailand by the Brooklyn Medical Centre and distributed free of charge to HIV/AIDS patients. Dr Steve Andrews, is a partner at the centre and is the man who will defy the Pfizer patent to dispense the life-saving generic drug. Sue Valentine spoke to him to find out what prompted this action.

Steve Andrews is the kind of doctor any sick person would like to have: his patients’ well-being is paramount, he’s committed to the principles of family medicine and he’s prepared to take on the world for a cause he believes in.

If all goes according to plan, Andrews will be a good doctor to many South Africans living with HIV/AIDS when his practice at the Brooklyn Medical Centre in Cape Town becomes the official importation conduit for the generic anti-fungal drug, Biozole. The patent for the medication is held by pharmaceutical giant Pfizer – a patent they’ve held for some 15 years.

Fluconazole is a potentially life-saving drug for people suffering from cryptococcal meningitis and various forms of thrush – conditions which often occur in people with AIDS. As a possible treatment for cryptococcal meningitis, fluconazole can cost up to R1 000 per week. In the initial stages of treatment, multiple capsules are used, reduced to two or three capsules a day for six to 10 weeks and a capsule a day for the rest of one’s life.

Andrews says capsules retail at R120 and cost R85 if bought directly from the manufacturer. In terms of an agreement signed between the South African government and Pfizer on December 1, 2000, fluconazole will be available via the public system free of charge, but how this agreement will work in practice remains to be seen.

The cost per capsule of Biozole – a generic manufactured in Thailand – is R2. According to Andrews, international laboratory tests have shown Biozole to be a good generic. “The tests have shown the drug is an equivalent generic and looking at the data, there doesn’t seem to be any problems with side effects. It’s a 200mg capsule and it seems to work fine.”

A consignment of biozole was imported into South Africa by the Treatment Action Campaign in November last year in order to make the point that cheaper drugs were available that could save lives. In December it was approved by a South African laboratory as a valid generic for fluconazole.

Andrews has been involved in the Treatment Access Campaign’s call for cheaper medication “for some time now”, but what really spurred him on to take up the biozole offer was when Pfizer committed itself to providing fluconazole at a cheaper price at the beginning of last year (2000).

“Since that time all the patients I had with cryptococcal meningitis are now dead. There are technicalities why the offer hasn’t materialised yet, but the bottom line is that my patients are still dead and they didn’t have to be,” says Andrews.

The breakthrough that offered Andrews the chance to import the cheap, generic life-saving drug came when the Medicine Controls Council agreed to issue the Brooklyn Medical Centre a provisional licence to import the medicine, provided it is approved by a South African laboratory.

Once this happens, Andrews will dispense biozole to individual patients. He hopes that he will be able to supply other doctors with the medication to give to their patients, but that too remains to be seen.

“The issue is that biozole is a beginning. Cryptococcal meningitis or oesophageal thrush are debilitating and dreadful things – people can’t swallow, they can’t eat and they can’t drink. This means they can’t work and they can’t take care of their families. We’re not talking just about treating these things, but about preventing them. We can change the way a person lives.”

Andrews is disparaging about some of the assumptions about AIDS. “There’s this quaintly held notion that dying of AIDS is about turning out the lights, turning up the music and you kind of fade away. Dying of AIDS is an awful thing.”

A controlled passion creeps into his voice as he explains further. “Dying of starvation and dehydration because you can’t swallow in the presence of drugs that can stop that is approaching the level of crimes against humanity.

“If we were to induce experimentally, to see how long people would live, they’d put you in prison. Yet we’re talking about watching people do this in the presence of drugs that can stop it. It’s not acceptable.”

Andrews is at pains to clarify that he is not opposed to healthy profits for drug companies and doctors. “I don’t see them as profiteers on the illness of humanity. The bottom line is, we wouldn’t be where we are if it wasn’t for the drug companies and I have a very good relationship with them which I’m hoping will survive and will continue.

But, he says, his interests are different. “My job is to be the advocate of my patient and that’s what I’m going to be.”

Will he make any money from acting as the conduit for importing Biozole? “At the moment the understanding is it will be given to people and donor funding will be found for this, but that is not a sustainable option. The way I’ve understood it, we’ll be making no profit whatsoever on the drug. Should it be sold, it will be at the same price that it’s been bought in Thailand.

He acknowledges that the generic imports will potentially cut into the billion dollars a year profit that Pfizer currently earns from fluconazole.

“It’s the virtual money that will be lost, but you have to start asking, when the economy of a country is at stake because all the economically active people are going to die, then you have to take a hard look at this. We’re in an emergency situation.”

As much as Andrews is ready to adopt a fighting stance to secure drugs for his patients, he has a humble attitude when describing the process of working with people with HIV/AIDS.

“General practice and family practice are about journeys and HIV is about that. Someone comes in and says ‘I have this burden, it’s mine, but I’d like you to walk with me’ and you take that with them. A large number of those patients are going to leave you before you leave them and that is part of the agreement and it’s difficult, but it’s a place of great privilege”.

Although HIV is a complex field, Andrews believes it is important that people see the condition for what it is. And that doctors become more comfortable about seeing people who are HIV positive as just another patient, with the same regard they would have for someone with diabetes or heart disease.

What else does he hope for in the South African response to the epidemic?

“It’s a difficult question, but my feeling is that top of my wish list is the need for political will. We need a message from the top that doesn’t just say ‘use condoms’, but that says ‘this is the biggest single threat to our country’. The people of this nation are dying, they’re dying of an illness that if we get together we can do something about.”