People are dying of hunger 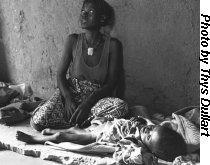 In the Northern Province, villages are being ravaged by poverty and HIV/AIDS. Health-e reports.

While some in Government, civil society and scientists squabble over the causes of AIDS and mortality in South Africa, people are dying of hunger in the rural areas of the Northern Province, the majority of them HIV positive.

Villages are being ravaged by poverty with many HIV positive adults dying on a daily basis leaving their families, in most cases the children, to fend for themselves.

One has to be reminded that the scenes of famine and disease playing out in these rural villages are not in Ethiopia or Angola where these sights are sadly familiar, but South Africa. Even worse, that this is an area less that three hours drive from Johannesburg.

“In the remote rural areas people with AIDS are starving to death…there is no one to help them…this while our area produces some of the best fruit and vegetables in the country…” says Sister Sally Duigan, HIV/AIDS co-ordinator for the Tzaneen Catholic Diocese.

Modiegi Mapheto, a retired nurse, has been working as a volunteer caregiver (among other things) in Lenyenye, a township outside Tzaneen: “Our people are dying of hunger. In fact the volunteers who are nursing the sick and dying are themselves starving.

Mapheto said many families were unable to bury their deceased. “I am trying to change the culture and tell people that they need not cook and provide transport for all the funeralgoers. I would like to see us all go to the grave, come back and wash our hands and go home.”

Perhaps the starkest sign on the escalating epidemic is the undertakers that have mushroomed in the Northern Province.

In Tzaneen alone there are at least five undertakers with one sporting at least 30 Mercedes Benz limousines, Audi station wagons and Toyota 4×4 bakkies parked in its premises.

Another organisation, Takalani-Nana cares for more than 500 AIDS orphans in the Pietersburg area alone.

“Every night we wheel a few bodies to the mortuary,” said a nurse at Dr CN Phatudi Hospital near Lenyenye.

This is confirmed by Catholic Bishop in the Tzaneen Diocese Hugh Slattery: “A day without a funeral is a good day.”

With high levels of stigma and denial as well as witchcraft incidents in the province, orphans are left to fend for themselves in their homes, mostly shacks or mudhouses.

Many are kicked out of schools as they are unable to pay the school fees, while others leave school and resort to prostitution or child labour.

“Apart from living in dire poverty, children orphaned by AIDS face discrimination and abuse at all levels, within their communities, at schools, and when attempting to access health and social services,” said Sonja Giese, HIV/AIDS co-ordinator at the University of Cape Town’s Children’s Institute. “Much of this abuse is a result of lack of knowledge about HIV/AIDS and is fuelled by misconceptions and myths surrounding HIV transmission.

“Community leaders and others in positions of power and authority have a role to play in dispelling these myths but instead, in many instances, they perpetuate these misconceptions through their own ignorance and fear,” Giese said.
– Health-e News Service

Government’s HIV/AIDS programme is bearing fruit, with fewer deaths now than in 2006. And older people are now dying, not young people in the prime of their lives, according to the Census released yesterday.

Some Gauteng health workers have gone almost five months without pay in a delay they estimate could be affecting thousands.

Results of the 20th antenatal surveillance survey, which were released this week, show that South Africa’s HIV epidemic is not gaining nor is it slowing down. But does this mean that the country’s efforts in combating HIV are paying off?