1st June 2006 | Health-e News
It's been seven years since the young AIDS activist Nkosi Johnson's dream was realised. A dream of having a home that houses HIV positive destitute mothers and their children. Now this unique home has more than 90 residents.

It’s been seven years since the young AIDS activist Nkosi Johnson’s dream was realised. A dream of having a home that houses HIV positive destitute mothers and their children. Now this unique home has more than 90 residents.

Emmalinah Sindane: [in Zulu]: Social workers tried to help me by sending me to other homes. But all the places they found for me ‘ separated me from my children, I’d rather live on the streets than give them up.

Yolisa: [fade under the vice]: Emmalinah Sindane tells me she would rather be on the streets than loose her children. She says she couldn’t find a home that allowed her to stay with her children ‘ until she got here. This is what makes Nkosi’s Haven unique.

Jane Mwasa ‘ house manager: We’re taking a mother and her child because this is about Nkosi’s mission. When Nkosi died, he felt there are kids who will be suffering because their mother has died of AIDS which is not a good thing. He couldn’t stay with his mom because she died. The bond of a mother and child should be kept together.

Yolisa: Jane Mwasa ‘ the house manager. Nkosi Johnson was one of South Africa’s longest surviving children born HIV+ – he was himself separated from his biological mother while he was a toddler. His life was characterised by his courageous fight for the rights of the HIV positive people. He died five years ago, two years after the home was set up.

Seven years on; Nkosi’s Haven is home to 14 HIV+ mothers, 51 children and 26 orphans. Even though the home was meant to be for those who’re HIV positive, the family has been extended.

Jane Mwasa ‘ house manager: The mother has to be HIV positive. If the child is not infected ‘ that’s not an issue with us.

Yolisa: Because of Nkosi’s legacy, destitute women are able to rest; knowing that should they pass on, their children’s lives and future are in safe hands.

Jane Mwasa ‘ house manager: Normally what we’re finding is that mothers want their kids to be left under Nkosi’s Haven’s care because they know the future of their kids is secured.

Yolisa: Emmalinah Sindani is one such mother. She came from KwaZulu Natal looking for a job. Instead, she was raped and as a result she was infected with HIV.   Frustrated and not knowing what to do; Emmalinah tells me she started sleeping around. As a result ‘ she fell pregnant.

She became so sick that she couldn’t do anything for herself.  Pregnant and homeless – a nursing sister at a local clinic helped her find her way into Nkosi’s Haven.  Emmalinah‘s main concern at the time was infecting her unborn child.

Emmalinah Sindani: [in Zulu] They’re all HIV negative. I was lucky. Thank God they did not get affected. I used nevirapine for the last child who was two months old at the time I got here.

Yolisa: [fade under the vice] She says she’s grateful that all her children are HIV negative; especially the youngest child who was two months old at the time when she arrived at Nkosi’s Haven. Emmalinah has two other children, a 9-year-old who also lives with her here.  Her oldest is 22 and supports himself.

She says she struggled long and hard before she was rescued and referred to Nkosi’s Haven.

Emmalinah’s just one among many who’re grateful for a place like this.  Another is 16 year-old Sthandiwe , she is an orphan and she is HIV+. She was also infected as a result of rape.

Yolisa: She was 12 when she was raped and infected. She had no comprehension of what it means to be HIV positive. She says all she understood was that if you have the disease you’re going to die. Until she was sent to the haven by a social worker.

Sthandiwe: I realised that I’m really sick; but even if you’re HIV [positive] you may stay longer ‘ maybe 20 years you can stay.

Yolisa: ‘My mother and father died, I am an orphan and I am infected – but I am living with a foster family and I am strong and healthy’¦I’m a very lucky little boy’  said Nkosi Johnson in the speech he delivered at the World Aids Conference in 2001. Sthandiwe and other residents here also feel ‘strong and healthy’. They feel lucky to be part of this home.

Jane Mwasa ‘ house manager: Nkosi’s Haven is actually unique; because they are in a well accepted environment. The stress is gone and everybody understands them so that’s why they keep going.

One of the country’s largest rural HIV/AIDS programmes was officially handed over to the Eastern Cape health department on Thursday in a ceremony held in Lusikisiki.

The strike by AIDS counsellors in Gauteng is continuing, despite the provincial heath department’s promise to settle the pay dispute. The striking workers say they will return to work only when the Gauteng Health Department has deposited their money into their accounts.

HARARE: (PlusNews) – A new report by Zimbabwe’s National AIDS Council (NAC), showing a dramatic rise in sexually transmitted infections (STIs) among people aged 15 to 24 in the capital, Harare, has health experts worried that the country’s success in reducing HIV could be unravelling. 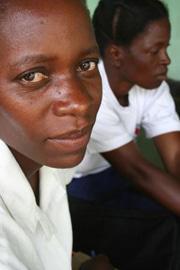