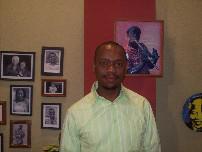 Ten years after being diagnosed with HIV, Pholokgolo Ramothwala has stopped waiting for his death. Instead, he says he is looking after his health, hopes to stop drinking alcohol and is working on creating financial security for his children.

While his peers were living without many cares in the world, life was different for Pholokgolo Ramothwala. At 19, while studying Journalism at Stellenbosch University in the Western Cape, Pholo decided to have an HIV test. The result came back positive. The diagnosis, he says, robbed him of most of his young adult life.

‘Look, when you are 19 years, the last thing that you should be thinking about is your life living with HIV because you start planning things differently’¦ If you look at most young people between the ages of 20 ‘ 25, they are supposed to be having fun with their life and I’ve spent most of that time planning my future because I started thinking about when do I want to have kids, what happens if I start getting sick early. So, you plan things differently from somebody who knows that they don’t have HIV. I know there are things that can happen to anybody, even though you don’t have HIV. But when you know that you’ve got a virus like this in your body you think differently, you plan differently for your future’, explained Pholo.

He is now 30 years old and he is well enough not to have to take antiretroviral treatment. This year he is marking ten years of living with HIV. And for Pholo, it’s a milestone that is worth celebrating.

‘I came up with the word ‘celebrating’ because I’ve made quite a few achievements in the past 10 years. As much as a person can look at HIV as somebody that’s supposed to be killing you, I see it as a victory for me that I’ve got myself so far with minimal problems. So, that’s why I’m celebrating the 10 years’, he said.

Pholo is not throwing a party to celebrate his 10 years of living with HIV. Rather, he has decided to publish ‘The Diary’, a monthly column where he will describe his life with HIV, the challenges of being HIV-positive and how he has dealt with them.

‘I’ve realised that there’s a lot of us who are going through the same thing. But there are not a lot of us who can speak about what we are going through. We need to share information about having children and the things to think about, looking after your own health, dealing with things like stigma and discrimination. I hope ‘The Diary’ will catch people’s attention and those people who can relate to it to be able to get the energy to do something and not just give up because they’ve got HIV’. I hope to take people along with me and share some of my experiences on just living with HIV, the daily things that I face, that I’m still a normal human being, I still face the same challenges, the only difference is that I might be having a virus in my body”, said Pholo.