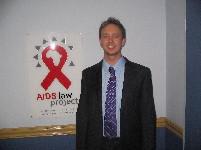 Justice is not always swift. But even after a bitter seven-year long labour dispute the taste of justice becomes sweeter when, as in the case of former Mpumalanga doctor Malcolm Naude, a court finds that your dismissal was unfair and orders your former employer to pay you a lump sum and to foot the bill for your legal costs.

In 2001 the Mpumalanga Department of Health denied a student doctor, Malcolm Naude, a position as a medical officer at the province’s largest hospital, Rob Ferreira. That was because he wanted rape survivors to be given antiretrovirals as part of their care to protect them from getting HIV infection. Naude had signed an affidavit in support of the Greater Nelspruit Rape Intervention Programme, GRIP, which the then MEC for Health, Sibongile Manana, kicked out of the hospital premises for providing ARVs to rape survivors. Naude would also pay dearly for this later. When he applied to become a medical officer at the hospital the provincial Health Department blocked his employment. Various tactics, including losing his application, were used. In the end Naude’s employment was confirmed verbally by the Department, but the actual offer of employment never materialised. In court papers, Naude argued that the Department had effectively dismissed him. And now the court has concurred with his argument.

‘I’m very glad. On one level, I’ve been vindicated. On another level we’ve made what we set out to do, which was to try and change the law a little bit so that doctors are backed a little bit more and that it’s enforced more in a legal way to follow your conscience than has been done previously. Finally, the patients that suffered ‘ they finally have had some kind of affirmation. They don’t get much out of it, but at least we remember them and their suffering,’ said Dr Naude after the judgement.

In his judgement, Labour Court Judge C.J. Musi said that Naude’s dismissal was ‘unfair’ and ordered the Mpumalanga Department of Health to pay him an amount of R100 000, almost equivalent to 10 months pay, and to pay Naude’s legal costs. The AIDS Law Project, which represented Dr Naude in the case, says Naude’s case is ‘one of a number of unforgettable chapters in the dark days of a politically-inspired denialism that enforced intimidation of doctors who wanted to have quality treatment for patients with HIV and AIDS’.