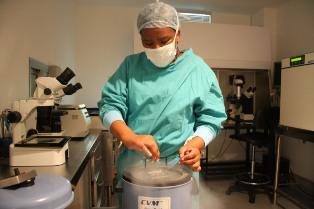 A Cape Town fertility clinic has opened one of the only dedicated laboratories for HIV positive patients in the world where couples can safely conceive and give birth to an HIV-negative baby.

Legislation requires of fertility clinics to have separate HIV laboratories where procedures such an in-vitro fertilization can be done.

‘Professor Augusto Semprini in Italy was the first person to start doing (fertility) treatment for HIV-positive couples (in the whole of Europe) and he has published his results in leading international journals. His techniques were shown to be very safe for HIV couples,’ explains Dr Paul le Roux, one of the partners at the high-tech Cape Fertility Clinic in Claremont, where the laboratory was recently unveiled.

The clinic deals with couples where either both partners are HIV positive, or one has HIV and the other doesn’t.

Le Roux said that although fertility treatment has been available for HIV positive couples in Europe for many years, this was a new development in Africa where the need was desperate, especially since the advent of anti-retroviral treatment which allows people who are infected to live normal, healthy lives.

There are two procedures than can be performed if the man is HIV-positive and his female partner is negative. The sperm can be washed by separating the seminal fluid which contains most of the cells carrying the virus, from the sperm. The sperm are then ‘resuspended’ in a neutral fluid and they can then be tested for the presence of any remaining virus. If the sample is found to be negative for HIV, the woman can be inseminated with the sperm.

If the man’s sperm count if not adequate, the ICSI (intra cytoplasmic sperm injection) procedure is done whereby a single sperm is injected into each egg. ‘This is almost 100% safe and has a very high success rate,’ said Le Roux.

If the woman is HIV positive she would continue with her antiretroviral treatment, deliver the baby via caesarean section and bottle feed the infant.

The transmission rate is found to be less than one percent if these procedures are used.

If the woman is positive and the man negative, artificial insemination is performed which prevents the couple from having unprotected intercourse. The same procedure is performed if both partners are HIV-positive.

In what has been described as one of the major breakthroughs in fertility treatment, fertility specialists are also now able to freeze eggs, allowing women who need to delay conception to do so safely.

Many young women with cancer who need chemo or radiotherapy, which will damage their ovaries, are now able to preserve and store their eggs and fall pregnant at a later stage once they have recovered from their treatment.

The new freezing technique, called Vitrification (rapid freezing) has shown outstanding results with up tp 90% of the eggs recovering once frozen and thawed. In the past only between 5 and 10% of frozen eggs could be used.

Egg freezing also allows for a potential egg bank to be formed, similar to the current sperm banks, to help couples with egg factor problems. Women who are ageing will also be able to harvest and preserve their eggs for use if they want to fall pregnant at a later stage.

Since then the clinic has aided in almost 2 000 pregnancies and is currently assisting between 800 and 900 couples with IVF per year.

‘Half of our patients are now from overseas, including central Africa,’ said Wiswedel, who for 10 years headed up the in-vitro fertilization and infertility unit at Groote Schuur Hospital before opening the Cape Fertility Clinic.

Details on where to contact the Cape Fertility Clinic can be found here. ‘ health-e news.