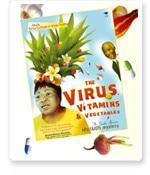 A new book, the Virus, Vitamins and Vegetables, documenting the South African government’s controversial response to the AIDS epidemic was launched in Durban and Johannesburg, recently.

The Virus, Vitamins and Vegetables is a compilation of essays by journalists, activists, doctors and scientists. Each of the 13 writers tells of what they have witnessed of the government’s response or lack, thereof, to the AIDS epidemic under Thabo Mbeki and Manto Tshabalala-Msimang, both fallen from their positions as president and Health Minister, respectively. The book is set against the backdrop of a period in the 1990s when Mbeki questioned the causal link between HIV and AIDS and his Health Minister promoted beetroot and garlic and other alternatives over antiretrovirals as treatment for AIDS. Their stance hindered the implementation of a crucial ARV treatment programme and many lives were lost as a result. A keynote speaker at the Durban launch of the book, Nozizwe Madlala-Routledge, Deputy Health Minister until just about two years ago when she was unceremoniously fired by the former president for holding views different to Tshabalala-Msimang’s, said:

‘The Virus, Vitamins and Vegetables chronicles the tragedy that unfolds when leaders choose to play with people’s lives by ignoring evidence and science and embracing untested remedies. It challenges us to consider our choices and responsibilities in a time of deep crisis and it forces us to ask ourselves: ‘Isn’t there more we should have done to stop the madness’?

‘The message in the book that we want to across is: ‘Let it never happen again’! It’s not just a philosophical thing. It’s really people’s lives that they are playing with’, said Thom about why they brought out the book.

‘Ours is not only a book to put forward our points of view, but it’s also a cautionary tale’ added Cullinan.   ‘The denialism around AIDS, amidst which many South Africans died, must never happen again’, she said.