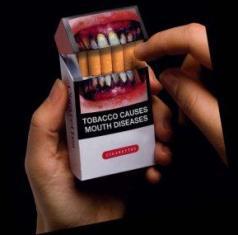 The World Health Organisation has called for governments to require all tobacco packets to have pictures showing the dangers of tobacco use.

According to the WHO website tobacco is the only legalised product that kills when consumed as the manufacture intended. Tobacco has lead to more than five million preventable deaths every year ‘ making tobacco a far worse killer than HIV/AIDS, malaria and tuberculosis.

WHO warns that all smokers will die from a tobacco related illness and that second hand smoking harms all those exposed to it.

This years’ theme is  “Tobacco Health Warnings’ focusing on picture warnings that have been effective in making people aware of the health risks associated to smoking and convincing them to quit.

Director of WHO’s Tobacco Free initiative, Dr Douglas Bettcher accused the tobacco industry of diverting attention from the deadly effects of its product for survival.

“It uses multi-million dollar promotional campaigns, including carefully crafted package designs, to ensnare new users and keep them from quitting,’ he said.

The theme is aimed at reducing tobacco use by increasing public awareness on the dangers of smoking.

Several studies show that even among those who believe that tobacco is harmful few of them understand its specific health risks.

Despite this, health warning messages on tobacco packages in most countries do not provide sufficient information warning consumers of the risks resulting from the habit.

A 2009 study conducted in China showed that only 30% of smokers knew that smoking caused coronary heart disease and only 17% knew that it caused stroke. A 2003 study done in Syria found that a small number of university students identified cardiovascular disease as a consequence of cigarette or even pipe smoking.

At the height of the global tobacco usage effective health warnings, particularly those that include images, have proven to reduce the appeal of tobacco to those who are not yet addicted as well as motivating users to quit.

Studies carried out after the implementation of pictorial package warning ‘ using images and text – in Brazil, Canada, Singapore and Thailand have consistently shown the positive impact of such warnings.

Dr Ala Alwan, WHO Assistant Director-General said health warnings on tobacco packages are a simple, cheap and effective strategy that can significantly reduce tobacco consumption and save lives.

“But they only work if they communicate the risk. Warnings that include images of the harm that tobacco causes are particularly effective at communicating risk and motivating behavioural changes, such as quitting or reducing tobacco consumption,’ he said.

However only 10% of the world’s population live in countries that require warnings with pictures on tobacco packages.

The Eastern Cape Health and Treasury MECs have been given an ultimatum to either reply to a set of questions related to the staffing crises at Madwaleni and Livingstone hospitals, or face litigation.

An audit of deaths of children under the age of five in the South African health care system shows that many of these deaths can be avoided.

A crucial meeting between the nursing profession and the Health Department ended on a high note in Johannesburg, this week. The meeting sought to address deficiencies of a profession that is despised by many South Africans who receive nursing care in government health facilities.