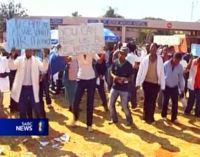 Doctors marched to the head office of the Health Department in Pretoria last week and handed a memorandum to Health Minister, Dr Aaron Motsoaledi. They have given government until June 19 to address their frustrations regarding poor pay and working conditions.

When accepting the memorandum, Health Minister Dr Aaron Motsoaledi offered two things: An apology for government’s delay in implementing the Occupational Specific Dispensation (OSD) pay package for doctors and a promise that doctors’ concerns will be addressed.

‘I want to take this opportunity to apologise for whatever happened from the 1st of July 2008. I was there. I was part of government when this decision was taken. I might not have been a Minister, but I was part of government. And for this reason, it’s within my right to apologise profusely to you for the delay that took place from the 1st of July (2008) until now’, he said.

‘But I want to assure you’¦ this matter, within government, is being resolved at the highest level possible. We are taking your memorandum. We are going to look into these issues’, Motsoaledi continued.

But doctors appear to be tired of talking and unfulfilled promises – and now an apology. Dr Ashley Mthunzi, who joined the march from Leratong Hospital on the West Rand, said:

‘The Minister has apologized and it’s accepted. But it doesn’t rectify any issues that are actually on the table right now. Right now we are facing a country that is actually at a collapse in terms of the health system and apologies are not wanted. If a patient demises and if a patient actually doesn’t get satisfactory service from our health system, apologies are not enough’.

‘This is not only too little too late, but it’s unacceptable because this is time for action. The Minister should understand and accept the fact that we’ve been patient for a long time. He, himself was a practicing doctor. The plight that we are raising today is not foreign to him. He knows that. That’s why he must stop just saying things. He must start doing things’.

At the heart of the doctors’ grievances is the issue of a pay adjustment, called the Occupational Specific Dispensation (OSD), which government has failed to implement since last July. The salary adjustment would reward doctors to recognize their qualifications, responsibilities, performance     and experience. However, the OSD is but one of many issues frustrating doctors. President of the South African Medical Association, Professor Kirsch, read and handed a memo of demands to the Health Minister, Dr Aaron Motsoaledi.

‘Working conditions in public hospitals deteriorate daily as a result of frozen essential posts, poor institutional management, budget and bed cuts. For decades, doctors have been poorly remunerated, resulting in a massive exodus to the private sector and to foreign countries’, read part of the memo.

Doctors have given the government until June 19 to address their demands.