Pharmaceutical giant Tibotec and the non-profit Global Alliance for TB Drug Development (TB Alliance) have teamed up to expedite the development of TMC207, which could become the first TB drug with a new mechanism of action in 40 years.

Interim data from an ongoing Phase II study of TMC207 was recently published in the New England Journal of Medicine. In the placebo-controlled study of 47 patients with multidrug-resistant TB (MDR-TB), it was found that 48 percent of patients receiving TMC207 in combination with standard treatment converted to negative sputum culture after eight weeks compared with 9 percent of those who received placebo and standard treatment.

MDR-TB, which is characterized by resistance to at least two of the most powerful medicines in today’s standard, four-drug regimen for drug-susceptible TB, is of particular concern given the rapid rise in the number of cases throughout the world and the difficulties in treating it. There were an estimated 510 0 00 incident cases and 130 000 deaths due to multi-drug resistant TB in 2007.

Under the terms of the agreement announced at the Pacific Health Summit in Seattle this week, Tibotec will continue to develop TMC207 for the treatment of MDR-TB, and on approval, will establish an access program to ensure the compound reaches those in developing countries who are in need. The agreement grants the TB Alliance a royalty-free license for the worldwide development and access to TMC207 in the field of drug-susceptible TB.

In another development the price of a liquid culture test which delivers diagnostic results for drug-resistant tuberculosis much faster than the traditional solid media culture has been cut by 80% increasing the chances of it reaching the poorer high burden countries.

‘We are very happy about this price reduction for a needed assay to better and more rapidly detect MDR-TB and XDR-TB. These results are also a direct outcome of a fruitful collaboration with public and private partners such as UNITAID and BD,’ said Dr. Giorgio Roscigno, FIND (Foundation for Innovative New Diagnostics) Chief Executive Officer.

‘During a time of severe economic distress, resources are constrained and high-burden countries face intensified healthcare challenges. This agreement means that it will be possible to make this test more accessible and affordable to those who need it most, which is very encouraging and promising.’

UNITAID, which primarily supports health-related projects via ‘air tax’, also announced that it would make a further U$61-million available to allow the extension of these tests to a further 11 high burden countries. This means that this technology will for the first time be introduced in low-income countries.

BD (Becton, Dickinson and Company), a global medical technology company, and FIND, a Swiss foundation that develops, evaluates and accelerates the implementation of new diagnostic tools for poverty-related diseases, announced the significant price reduction in the cost of liquid culture testing also at the Pacific Health Summit in Seattle this week.

The price reduction, announced five months earlier than anticipated, arises from a November 2007 agreement between BD and FIND.   At that time, BD agreed to reduce already below-market prices upon the completion of 3,5-million tests, a milestone achieved this month.

The lower prices will enable more tests to be administered in 39 high-burden countries, as identified by the World Health Organization (WHO).

It’s a scandal that tuberculosis has not been given proper attention and this is mainly because it is a disease of the poor, said Nils Billo, Executive Director of the International Union Against Tuberculosis (TB) and Lung Disease (The Union).

A team from Stellenbosch University’s Desmond Tutu TB Centre will be monitoring 200 children at the Brooklyn Chest Hospital in Cape Town over the next five years in a potentially groundbreaking trial. By Kim Cloete. 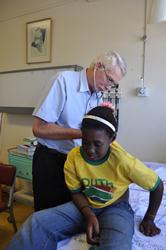