Home » I wish I had never lit a cigarette 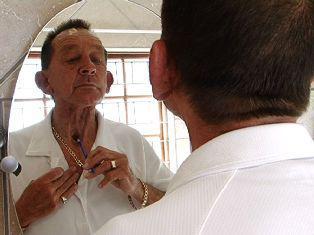 5 million people worldwide die of tobacco related diseases every year, which is one death every 10 seconds. Despite the crack down on smokers in South Africa through increased tax on cigarettes and restrictions on where they can smoke, few people take heed of the warnings that tobacco kills. In this insert produced by Fathima Simjee, Ken Newman, who was a smoker for over 50 years explains why he wishes he had never lit a cigarette in his life. 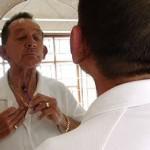 Until a few years ago, Ken Newman was a heavy smoker.   But then doctors diagnosed him with throat cancer, which nearly killed him.

Ken:  Just the word Cancer alone. You become suicidal, I didn’t want to live, and I mean how do you go through life without speaking?

Ken: I wanted to be one of the boys, all of my friends smoked, the whole lot of them smoked. I started smoking, you know when you have a few drinks then you have an extra smoke. And I ended up smoking I’d say between about 40 or 50 a day. I never ever thought this would happen to me, a lot of people don’t think it will happen to you and then 8 years ago I got a bad throat and I went to the doctor.

His throat was riddled with cancer. He was given radiation treatment to try and burn out the tumours.

Ken: The radiation is actually worse than the operation. You don’t eat, I lost all my teeth, you lose all your hair, you don’t shave, and you lose your sense of smell, your sense of taste, that’s what radiation, does to you. But the radiation did clear me up. But only for a period of 4 years and then it came back.

And then there was only one option, a total laryngectomy completely and then they cut out my voice box.

You know I’m talking with a hole on my throat, I’m going to take this bib off and show the viewers you would like to be like this, especially the ladies. There has been an incline in lady smokers, and I’m sure no young attractive lady would like to walk around like this. That’s what you will look like. And it’s not a nice sight to see.

He breathes and speaks through a hole in his throat.

Smoking can do this to anyone, at any time.

Ken: And it’s not because of my age and because I was smoking 40 50 cigs a day. Going through to the hospitals I’v seen youngsters there of 19 20, smokers that have got this and we don’t hear about it.

He is not the first in his family to suffer from smoking related diseases, but even as he reflects on the short-sightednessof his decision to smoke’¦it’s too late and the damage has been done.

Ken: My father and mother were heavy smokers, both smokers yes and I lost my mother through cancer, but not throat cancer, other cancer, and my father a heart attack, and heart attacks are also tobacco related.

Like many smokers, Ken ignored warnings about the dangers of tobacco.   Once a sportsman himself, today he can only watch from the side lines.   His condition couldn’t be more different to that of this young boxer who he sponsors.

Ken: In the old days they used to say every smoke you have is a nail in your coffin. We used to laugh and look at me sitting here today. That was a nail in my coffin all around.

No one is to blame except yourself, except myself. I wanted to smoke I did smoke.

When I look at myself in the mirror, I actually get disgusted. This could have all been prevented.

If I had to go back I would never have touched a cigarette in my life.