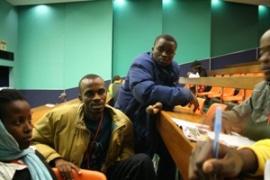 At a week-long international summit in Johannesburg recently, men and women were challenged to step up the fight on gender-based violence.

Speaker after speaker urged delegates not to turn a blind eye to any form of abuse against women.

Over 100 delegates from 25 countries across the world converged at the University of Johannesburg to discuss ways in which fighting violence against women can be improved.

Most of the delegates have been victims of a range of violent incidents themselves.

‘From domestic violence to trafficking to rape as a tool of war… We have many delegates that have come from really horrific backgrounds and they have experienced first-hand what violence against women and children is like in a conflict zone’, said Karen Robinson, Managing Director of Man Up, an organisation of men and women from different countries whose focus is to challenge the youth to end the spate of violence in their communities. Man Up convened the summit.

The summit held a number of workshops which addressed topics ranging from using sport as a tool to curb violence and communicating to perpetrators of violence. Psychologist, Daniel Lima from Brazil, is a member of the Brazilian Network of Men for Gender Equity and facilitated some workshops.

‘Most will say ‘I’m not a violent man, so why are you trying to talk to me about that?’ We are trying to show them that that’s not enough. We have to do a lot more because it’s not an individual problem, it’s a society problem and to change it we need everyone to get involved. We need them to start challenging other men. When you hear sexist jokes or see someone harassing a woman on the streets you have to do something. It, at least, has to get to you, you have to get annoyed by it, and it has to make you angry. If it doesn’t, then there is something wrong’, Lima said.

He added that most men avoid talking about women abuse. Lima said in his home country, Brazil, domestic violence is a huge problem and it has to stop being a feature of family life.

Another facilitator, Mohau Makhosane, ran a workshop on the physical and mental impact of sexual violence on women.

Makhosane, a chief researcher with South Africa’s Medical Research Council, explained how the criminal justice system can have detrimental effects on survivors of violence, specifically rape.

‘Because of the things they have to go through – the procedures in the system when they have made a report, which are not sensitive to their needs – that, in itself discourages them from making reports. It could be time delay between you making the report and the time it will take before it is heard in court.

If you report a rape today, they still have to do investigations before making an arrest that can take a day to 3 or 5 years. You can imagine what that does to the survivors knowing that their perpetrators are still out there and they can come back to silence them’, said Makhosane.

A delegate from Burundi says what brought him to the summit was his organisation’s mission to promote a culture of peace, coming from a war-torn country. Thiery Kajeneza, says the youth in Burundi are easily manipulated because of poverty and unemployment.

‘The youth is manipulated by politicians because it’s caused by the poverty and lack of jobs. The summit will enable me to get mentors that will be useful for when I return to my country, such as sensitisation using tools such as poems and arts and media internet’, he said.

The summit also focused on how to rehabilitate perpetrators of violence. Neil Watson works for a London-based group, ‘Violence Initiative’.

‘We ask them, ‘where did you pick that up, where did you learn that and why do you think it is a good idea to be violent?’. Then we work in the future on how they can change their behaviour. Most users of violence suffered extreme violence when they were younger and they choose a path to say ‘it happened to me’, and we try find out what exactly it was that happened to them’, said Watson.

For those who have suffered violence, The Medical Research Council’s Mohau Makhosane, said that it is important for people to know that there are services available to assist them. He said if victims do not seek help, the repercussions could be dangerous.

‘There are many community organisations out there providing psycho-social support. People normally downplay the importance of having that network or support system within a community where, if they experience anything, they can go there for help and be amongst people who have experienced a similar incident in their lives and, therefore, would provide them with the necessary support that they need and understand what they are going through’.