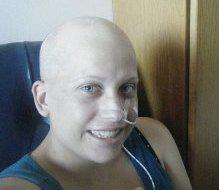 Every year thousands of South Africans of all ages and races are diagnosed with diseases such as leukaemia, marrow failure or some other rare blood disorders. Seventy-five percent of these patients are under the age of 25. Their only hope of survival is a blood stem cell transplant from a donor who shares the same tissue type.

What was supposed to be a fun and an exciting gap year in England,   last year, turned into a nightmare when then 20 year-old Simone van Kraayenburg suddenly realised that she was starting to bruise easily and was feeling tired all the time. Naturally, she looked for medical help and after months of repeated tests, she received news that would turn her life upside-down.

‘I was hospitalised for three days, moved from one hospital to the next, where I underwent my bone marrow biopsy. It actually took a month and two biopsy tests to diagnose.   They diagnosed me with Myelodysplastic Syndrome (MDS). They said I would need a bone marrow transplant as soon as possible’, says Simone.

Shocked, scared and alone in a foreign country, Simone quickly made arrangements to return home.

‘There is no book to prepare you to get diagnosed with cancer. But because it had taken a month already to diagnose, I suspected something really bad was coming.   My whole life stopped completely’¦ all my goals and plans because I didn’t know what was going to happen. I didn’t know if I was going to be here in a year’s time.   My life just became about finding my donor’, she says.

Chances of finding a matching donor are 1: 100  000. Simone’s only small glimpse of hope was that her brother would be a match for the bone marrow stem cells transplant.

‘My brother was tested first as a possible donor. It’s my only sibling and his was then negative. My cousin was also tested and that was also negative. Then we searched the local registry… (from) which I didn’t get any matches. Then, we found out that we have to get an international donor. But the costs involved’¦ just the donor search for an international donor is about R450  000, which the medical aid does not pay a cent for’, says Simone.

Simone tried to stay positive and strong throughout this challenging period of her life. But she couldn’t help but feel guilty when she noticed the financial stress her illness caused her family.

‘There was one day where I was just close to committing suicide because it was just so depressing – the costs involved, the stress on the parents… And I started feeling guilty that if it was not for me, my family wouldn’t have the stress of the cost. It was really unbearable’, she says.

Luckily, six months later, Simone received news that would possibly change her fate. They had found her matching donor, a 25 year-old male from Germany.

‘How do you thank someone in words that has literally saved your life?   If it was not for him, I would be six feet under’, says a grateful Simone.

Finding a matching donor was a huge triumph, but Simone still had to undergo high dose chemotherapy to completely destroy her own bone marrow and any remaining cancer cells in her body.   She started getting very sick and lost her hair during her chemotherapy.

‘It’s more than just hair falling out. It’s the emotional thing of’¦ the disease is going out of your body.   My throat got so sore, I was not able to eat, I had to have a feeding tube put in for a week.     You can’t taste anything for a few months afterwards.   And, then, there are the long-term effects of infertility, which is one of my next biggest hurdles to overcome’, she says.

Simone had a successful transplant and went to remission at the beginning of this year. However, chances of a relapse are mostly likely in the first year after the transplant. Bone marrow stem cell transplants have just a little over 60% success rate.   Simone is very much aware of this and continues to go for blood tests every month.

‘Essentially, a bone marrow stem cell donation is actually a blood donation.   A needle goes through your arm, your blood passes through a machine, and we separate a blood product from you – being your stem cells ‘ and, then, we transplant those into a patient.   Those stem cells we take from you can re-constitute an immune system, and this is incredibly important for people who suffer from diseases like leukaemia and other blood disorders’, says Carnerson.

Currently, there are about 68  000 people registered as donors with the South African Bone Marrow Registry (SABMR). Carneson says this is not nearly enough.

“If you consider that your chance bone marrow stem cell match is one in a 100  000, we’re just not there yet in this country. What’s more is that to be a bone marrow match, it kind of goes on genetic typing, so it’s much easier to match someone in your own genetic pool.   We refer to these genetic pools as races.   So, essentially, a Caucasian person can only donate to a Caucasian person and an Asian person can only donate to an Asian person. And, therein, lies the problem.   The 68  000 people we have… people of colour constitute, roughly, about 1  600’, he says.

Canerson further explained the procedure for being a bone marrow stem cell donor.

‘They draw the equivalent of two teaspoons of blood from you, and then they go on a data base. Should you be a match for anyone at anytime they will call you up to donate. It does not cost a cent to donate. But the test costs R1000, which we cover should you not be able to cover it yourself’, he says.

There is only one way to get well after being diagnosed with Multi-Drug Resistant (MDR) TB. It is to stay positive and to adhere to taking the prescribed treatment, says Siphamandla Nkukayi, an in-patient at Sizwe Hospital. Ayanda Mkhwanazi of Health-e News Service paid him a visit.

Millions of AIDS patients in Africa will face severe suffering and death if donor nations and organisations continue to back-track on their commitment to fund AIDS treatment programmes, warns Medecins Sans Frontieres (MSF).

With maternal health being one of the priority areas for health improvement, it’s important for primary health care facilities to improve care for pregnant mothers. The Witkoppen Health and Welfare Centre in Fourways, north of Johannesburg, says it’s trying to improve on these health indicators.