Home » Green light for breastfeeding only 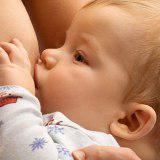 His announcement followed unanumous recommendations at a two-day consultative conference of infant feeding experts in Pretoria.

Addressing the media Motsoaledi pointed out that South Africa was one of only 12 countries in the world where infant mortality has been on the increase.

‘We have committed ourselves to changing this unacceptable situation. Hence reducing child mortality is one of the most important priorities in our country and central to this is breastfeeding as a child survival strategy,’ he said.

He said the meeting had recommended that formula feed only be given when authorised by a health practotitioner.

He said it was wellknown that breastfed babies were better protected against infections like diarrhoea, respiratory illnesses, allergies and ear infections, they are at much lower risk of malnutrition, and as adults are at lower risk of chronic lifestyle diseases such as obesity, coronary heart disease and type 2 diabetes.

Mothers who breastfeed also benefit. They have a reduced risk of developing breast and ovarian cancer. In addition, they will return to their pre-pregnancy weight more easily, and the likelihood of falling pregnant again while breastfeeding is reduced.

UNICEF and the World Health Organisation have confiremd that the evidence has conclusively proven that exclusive breastfeeding is a safe infant feeding option even for HIV-positive mothers ‘ and that the benefits of them exclusively breastfeeding their children far outweigh any potential risks.

‘Research has shown that if the baby of an HIV-positive mother is exclusively breastfed, the chances of it being infected with the virus are greatly reduced, but greatly increase if they practice mixed feeding,’ said Motsoaledi.

All babies should be breastfed for at least the first six months of their lives. Babies of HIV-positive mothers should also be exclusively breastfed for the first 6 months, with complementary foods being introduced after six months. It is also recommended that both mother and infant undergo antiretroviral therapy throughout the breastfeeding period.

‘It is undeniable that breastfeeding is the very best way to nourish babies ‘ there is, literally, no substitute for it. This is why on the basis of this consultation meeting we will adopt the WHO’s recommendations for a single infant feeding strategy, namely exclusive breastfeeding including   for HIV positive mothers,’ the minister announced.

He said the department would also be discontinuing the distribution of free breast milk substitutes through health facilities, as this cannot be reconciled with an exclusive breastfeeding strategy. ‘It will only be recommended by an authorised health practitioner to those mothers who, for medical reasons cannot breastfeed,’ he said.

Motsoaledi added that he will draft regulations to enforce the international code of marketing of breastmilk substitutes.