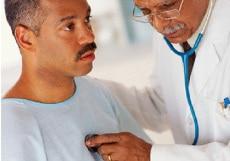 The face of cardio- vascular disease is changing. It has moved from a disease affecting mostly white males to one that affects younger, black people. This is largely due to lifestyle choices.

Fatty foods, smoking and lack of exercise are big contributing factors to cardio-vascular disease. Yet, many of us seldom heed messages cautioning us to change our life-styles, especially our diet.  Many people, such as Zethu Phaliso, admit to this.

‘I just buy whatever I find.   I don’t think, maybe, I should eat healthily. I do eat a lot of fats and after that I drink lots of water and jog. It’s not a problem’, says 27 year-old Zethu.

‘When I’m at home I eat fatty foods’¦ fried eggs, fried fish, fried russians, amagwinya… Everything on my plate would be like fat. But in the mornings I go jogging.   So, it’s like I eat my fat, then I go jogging to reduce fat in my body’, she says.

Some, like 24 year-old Junior Buhlebodwa Dludla, from Soweto, blames the convenience and affordability of unhealthy or junk food for their bad eating habits.

‘We eat bunny chow – i-kota, you know. Ikota is not actually healthy.   So, yeah, I don’t eat healthy, I think.   Getting a non-healthy meal is like a phone call away. You can call them and tell them, ‘this is what I want’.   And you get it in minutes’, says Junior Buhlebodwa Dludla.

Even famous and popular kwaito star, Brickz, admitted to enjoying his fatty meals.

‘We come from Soweto… from the townships.   We are used to eating pap and meat.   I’m used to eating anything and everything that I can find. It’s hard to keep to a healthy diet and not eat the things you are used to like chicken, papa and chakalaka’ says Brickz.

However, Brickz says he does exercise, at least, once a week.

‘I believe I’m a strong healthy man.   I usually go for boxing classes once a week when I’m not busy. I don’t exercise a lot, but I do at times just to keep myself fit’, he says.

It would seem that our respondents do know that eating healthily and exercising is important. However, they find it difficult to actually change to a healthy lifestyle. But they best be warned as fatty foods and lack of exercise contribute to one’s increased cholesterol level, high blood pressure and diabetes, which can all lead to a sudden heart attack.

Professor Raal says, as a result, diseases such as heart complications are no longer a ‘white man’s disease’.

‘At this point in time in South Africa, there are about 80 heart attacks a day and as many strokes. It used to be considered as sort of a ‘white man’s disease’.   But now, particularly in the urbanised black population with more fast foods, we are increasingly starting to see more heart attacks, obesity and more diabetes’,   says Professor Raal.

He says statistics show that non-communicable diseases are on the rise.

‘When I was a medical student, to have someone to come with a heart attack to Baragwanath Hospital, was rare. We never saw it. But, now they are seeing two or three heart attacks a day. So, it’s all changing because of the change in lifestyle’, says Professor Raal.

Professor Raal says people should be aware that there are hardly any warning signs for cardio-vascular or heart disease.   He says one only realises that they are at risk after they’ve had a heart attack or a stroke.

‘The current recommendation now is that you should not smoke and if you’re over weight, try get your weight down to what it’s supposed to be. The bigger the tummy, the bigger your risk of diabetes and high blood pressure’, he says.

Professor Raal says while there may be other contributing factors such as genetics to the increasing   incidence of cardio-vascular disease, up to 80% of it can be prevented if people start making baby steps towards living a healthier lifestyle.