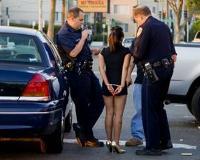 Seven out of every ten sex workers have been abused by police officials. A survey done by the Women’s Legal Centre, shows that sex workers report having been threatened with arrest or forced to sleep with police officials in exchange for their freedom.

‘We are being harassed by the police and they are using by-laws on us. Right now thugs are taking advantage of us because of the bad relationship between ourselves and the police’, says one sex worker, describing how the continued criminalisation of sex work is affecting them.

Another sex worker spoke of how she was detained by the police when she was pregnant. Being HIV-positive, she was forced to default on her medication to prevent her from transmitting the infection to her unborn child

‘The worst thing for me was being denied my ARV’s when I was on PMTCT (prevention of mother to child HIV transmission programme). I was pregnant and denied this treatment for the whole weekend. I felt it is the worst thing because it was about the child inside of me who could have gotten infected’, she said.

During a sex workers’ symposium in Johannesburg this week, sex workers continued to express their dissatisfaction with the police, saying police brutality is rife within their industry. Amidst the call for sex work to be decriminalised, sex workers are also calling on police officers to stop abusing them. They say they cannot enjoy equal human rights as enshrined in the constitution.

A study by the Women’s Legal Centre confirms that police officials are the primary abusers of sex workers.

‘Seven out of ten sex-workers that approached us reported police abuse. And it was around assault, bribery, harassment, sexual assault and verbal assault… bad conditions in the cells just grave and severe human rights violations. And, what is also alarming, is that many of these violations occur around other police officers and they stand by and witness this’, says Stacey-Lee Manoek of the Women’s Legal Centre.

Manoek says in many instances, in exchange for their freedom, sex workers are often left with the choice of sleeping with the police for free.

‘What we found is that almost one in six of the sex workers who approached us had been physically or sexually assaulted. Many sex workers reported that when approached by police officers, they are threatened with arrest or they are told: ‘If you give me sex and money I will release you’. There are sex workers who have reported rapes and are afraid to lay the complaint against the officer because of the intimidation.

One sex worker told us that she was picked up by a police officer, taken to a dark alley and brutally raped. And she said she just begged him to please put on a condom and he asked: ‘You are a prostitute, what do you know about condoms?’, says Manoek.

But the violation of sex workers’ rights doesn’t end with the police. In some instances, they are also denied access to basic health care services. Linda Dumba, a sex worker operating in Limpopo, says the treatment they receive from nursing staff at clinics is appalling.

‘I once got to a clinic… I had an STI and I was explaining how I was feeling and she (the nurse) told me: ‘You come all the way from Zimbabwe and now you are giving us problems. You cannot even explain how you are feeling. How am I supposed to help you?’ I was trying to explain in English and I speak Shona. They speak another language. She ended up calling the other nurses. I felt embarrassed that every nurse knows why I am here’, Dumba says.

Meanwhile, the Sex Workers’ Education and Advocacy Task Force’s (SWEAT) Dr Gordon Isaacs says the health of sex workers will continue to be under threat, unless the profession is decriminalised in South Africa.

‘In pockets of the provinces, health care providers may be prejudicial. They might not provide the proper health services, for example, shame the sex worker and say she is HIV-positive. They may, for example, discriminate against treatment of a sex worker if they come for the fourth time because of an STI infection. We’ve had reports where the nursing system says they are not prepared to treat you’, Isaacs says.

Isaacs says these are challenges that SWEAT will fight to overcome. He says SWEAT will continue to advocate for the decriminalisation of sex work, especially to get sex workers protected against police brutality.