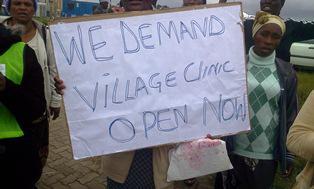 OurHealth: Lusikisiki – Several attempts to prevent the closure of Village Clinic, which treats a large number of people living with HIV, have failed and patients were met with locked doors on Tuesday morning. 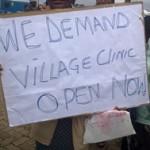 In a recent development health department officials told OurHealth that they were considering erecting temporary structures from which the clinic can continue to function while they attempt to secure alternative premises.

Speaking after a meeting with activists, management and community leaders David Bezana, OR Tambo district health manager, said they would pull out all the stops to speedily rectify the situation. A follow-up meeting will take place on Monday.

A notice posted on the Village Clinic door last week indicated that the busy clinic would be closed on October 31 and patients were advised to travel to St Elizabeth Gateway Clinic, which about a kilometre away. However, a number of baffled patients told OurHealth that they were turned away from St Elizabeth and told they needed referral letters from Village Clinic.

Patients were greeted with locked doors at the local clinic earlier this month with unconfirmed reports indicating that it was closed after the Eastern Cape Department of Health (DoH) failed to pay the rent.

This was the excuse given at the time by Mrs Ntlangulela and Mrs Myolwa from the District office to an angry crowd of people queuing in front of the clinic for treatment.

According to them, payment issues with the rent have been ongoing since 2010, until finally the landlord, TEBA (a recruitment organisation), decided to lock the premises.

After discussions between TEBA and the District DoH, the clinic doors were reopened for another two weeks while the district awaited instructions from the Provincial DoH.

TEBA said at the time that if the Provincial DoH did not respond within two weeks they would evict them.

It is understood that the Village Clinic staff were transferred to St Elizabeth which has already been struggling to manage the close to 1 600 patients on ARVs every month.

OurHealth interviewed some of the Village Clinic patients who had been turned away.

Nomalanga Nodada took her one-year-old grandchild to the clinic in the hope of treating her persistent cough and skin rash.

“Nurses told me to fetch a referral letter from Village clinic even though they knew it was already closed. I became fed up and decided to go home,” said a distressed Nodada.

A pregnant woman who had gone to the clinic’s antenatal care section was told to wait until the nurses had seen all ‘their patients’. She was made to wait for hours even though she was there early.

An administrator at Gateway Clinic told OurHealth that the rent for Village Clinic was paid last week already, but that it may have failed to register on the system.

“This situation could have been avoided if there was strong political leadership and commitment from our district health department managers,’ said the administrator who asked to remain anonymous

A community mobiliser from Treatment Action Campaign Nonzaliseko Ntwana said she had defaulted on her antiretroviral treatment as she had been unable to collect her drugs from Village Clinic.

‘I am on the second line ARV regimen and if my adherence is good it is possible for me to live for decades. This chaos will hamper my adherence. We need a long term action plan for Village Clinic and the Eastern Cape AIDS Council should be showing leadership on this matter,” said Ntwana.

Tembisa Kwetane, a TAC Community Monitor who worked at the Village Clinic accused the health department of being negligent when it came to the treatment of people living with HIV.

‘I did not get my ARV supply because there is a shortage of medicines due to the strike in Mthatha depot,” she said.

“This is wrong and unacceptable because as the community we have a right to access comprehensive health care services in our public health facilities. The state of health in our province is not prepared for the implementation of the National Health Insurance plan,’ Kwetane added.

This week patients who became fed-up with waiting to be seen at St Elizabeth joined a TAC picket outside the clinic.

* Vinjwa and Mvlisi are OurHealth Community Journalists reporting from the OR Tambo health district in the Eastern Cape.