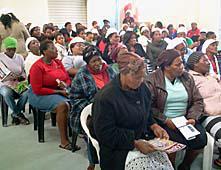 East London: A three-day TB-awareness campaign was recently held at Duncan village in the Eastern Cape to educate the community about the symptoms and risk factors for the disease.

The community of Duncan village  is particularly vulnerable to TB as many people live in poverty.  Families there live in one-room shacks due to the high rates of unemployment in the community. Often houses with TB patients have poor ventilation, causing other family members to be infected too. Sanitation in the region is also worrying and dirty water pools in the streets.

The campaign, hosted by the Treatment Action Campaign (TAC) and Donald Woods Foundation, started at the East London Taxi Rank and then moved to other venues, until it finally gathered at the Duncan Village Clinic. Peer educators were informing people about TB all along the way.

“We appreciated the initiative and urge that the activity be done in our taxi ranks regularly as we cannot attend most activities done for communities,” said a taxi driver who asked to remain anonymous.

Many taxi drivers are scared of being infected as they transport hundreds of people, many of who are sick and coughing, in an enclosed taxi every day.

“We need stickers explaining to commuters that they have to keep windows open for better ventilation to reduce infection”, said a taxi owner. “We often have arguments with passengers who close the windows”.

About 133 taxi drivers were reached by the campaign and about 6 000 male condoms were distributed. An additional 15 people were also screened for TB while 24 people were tested for HIV.

According to Portia Ngcaba, TB Care Association coordinator, the campaign also helped identify TB patients who have defaulted on their treatment.

“When doing the outreach educational TB programme we found patients that are defaulting their treatment and do not want to be admitted at Fort Grey TB hospital. We reported these cases to ward councillors who then assisted us to take them to the hospital”, said Ngcaba.

A doctor from Fort Grey SANTA hospital shared the latest research on TB, MDR and XDR treatment and prevention, while promotional material and TB bandanas were distributed among the community.

Other partners who supported the campaign included Community Media Trust (CMT), the Department of Health, ATTIC and DOT Supporters.

Thandeka Vinjwa is an OurHealth Citizen Journalist reporting from Lusikisiki in the OR Tambo health district in the Eastern Cape.