Home » ‘Epilepsy messed up my life’ 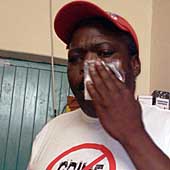 Lusikisiki. ‘ Siyabulela Mvilisi’s family thought he was cursed when he used to inexplicably topple over and have seizures.

But there were no demons or witchcraft. Siyabulela suffered from epilepsy, a common neurological disorders characterised by recurring, unprovoked seizures.

“Epilepsy prevented me from achieving my goal of becoming a professional nurse and messed up my life,” said Siyabulela. “I used to suffer memory loss, painful joints, tongue biting and other minor injuries as a result of an epileptic attack.”

Siyabulela, who is now 48-years-old, lived with epilepsy for many years. Although he took anti-epileptic medication he was still plagued by regular attacks, until the seizures eventually stopped 1992.

“Not all epilepsy syndromes are life-long. However over 30 percent of people are unable to control seizures, even with the best available medications,” said Dr DK Boateng, a general practitioner in Lusikisiki.

In many cases  the cause cannot be identified, however, factors such as brain trauma, strokes and alcohol and drug abuse are sometimes associated with the disease.

“This is a clinical diagnosis that depends on an accurate description of the attack. And in this case it is very crucial for the doctor to have an eye witness to describe the attack because the patient is often unconscious,” said Boateng.

Things to do with someone who has a seizure:

– If they have collapsed, cushion  his/her head with something soft.

– Do not hold him/her down and never put something in the mouth during an attack.

– After the seizure check that breathing has returned to normal and put him/her in the recovery position. Stay with the person until she/he regains consciousness.

– Call an ambulance if a fit lasts more than five minutes or the person is injured.

People who suffer from epilepsy should stay healthy through regular exercise, eating  a balanced diet and avoiding excessive drinking. Advice from support groups or a general practitioner can also help someone adjust to life with epilepsy.

Thandeka Vinjwa-Hlongwane is an OurHealth Citizen Journalist reporting from Lusikisiki in the OR Tambo health district in the Eastern Cape.