VHEMBE. – With news about the gruesome rape and murder of Anene Booysen still fresh in the country’s psyche, news about the gang rape of a six-year-old girl shook the community of Mulodi Village in Limpopo where the crime took place.

VHEMBE. – With news about the gruesome rape and murder of Anene Booysen still fresh in the country’s psyche, news about the gang rape of a six-year-old girl shook the community of Mulodi Village in Limpopo where the crime took place.

Two of the three suspects have been arrested, and police are closing in on the last suspect who is still at large.

It is alleged that on the 11th of April the victim was accosted by the three suspects while walking home from school with two friends.

“We were playing in the road on our way home from school. The road we take has many trees and it is far from our homes,” said one of the victim’s friends. “We saw three man walking towards us but weren’t scared because we knew those men.”

The other who was also with the victim when she was abducted told OurHealth that: “We never thought of running away and when we reached those men they stopped us and said they had something to ask us. When we stopped, two of them grabbed our friend and although the other one tried to grab one of us we managed to run away to the nearest house,” she said.

The two girls ran to Makumela Ndou’s house and told her what happened. “I called the police immediately, and when they arrived the kids showed them where it happened,” said the 43-year-old Ndou.

“We found her lying on the ground bleeding and helpless. The two kids who called for help managed to describe the three suspects and they even knew their names,” she said.

Rudzani Adolph Munzhelele, station manager at Mutale Police Station told OurHealth that: “The two friends of the victim were very helpful and gave good descriptions of the suspects, and we were able to arrest two of them the very same day,” he said.

“We are still searching for the last suspect and we will not rest until justice is done. He can run away but he can’t hide because we have many eyes and ears around our area.

“The girl has recovered from her injuries. We ask the public to report all rape cases so that justice can be done,” he added.

As South Africa battles a growing obesity problem, Soshanguve Block M outside Pretoria has welcomed a new park that may help get community members outdoors and exercising.

Over 40 000 people in some of the country’s poorest villages and towns have flocked to “grant registration jamborees” being run countrywide to help poor parents to get childcare grants. Kerry Cullinan reports. 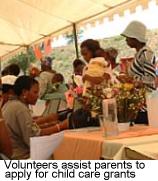 CAPE TOWN. ‘ South African children have equal rights under the Constitution, but the worlds into which they are born and their opportunities in life are very unequal. This was the message Katharine Hall, senior researcher at the Children’s Institute (CI) at the University of Cape Town shared yesterday at the launched the South African Child Gauge 2012, an annual review on the state of South Africa’s children. 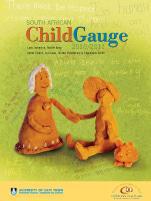