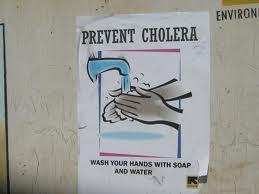 The Department of Health and Social Development in Limpopo is collaborating with the Zimbabwean government to curb cholera outbreaks in both countries.

This was revealed by the department spokesperson on cholera, Phuti Seloba.

Seloba said the collaboration started in April following a malaria incident which was linked to a Zimbabwean national who was staying in one of the shelter centres in Musina, Nancefield.

According to Seloba, the man came from Lindela Detention Centre in Zimbabwe, where he had been deported, before he came back to South Africa last month.

‘When this cholera outbreak was linked to this man, it was established he had come back from Zimbabwe after being deported from Johannesburg.

‘We managed to trace all his movements, and managed to curb the cholera virus where he’d been and manage the situation. We did this with the help from the Zimbabwean government, Vhembe District Municipality and Musina Local Municiplaity,’ Seloba said.

During Easter, Seloba said, the department had been involved in an awareness campaign in which flyers were distributed in the Musina area to help educate people about cholera.

A centre had also been established in Musina where Zimbabwe and South Africa would be able to help work together to avoid outbreaks from either side of the border. People cross the Beitbridge border from both sides of the two countries on a daily basis.

‘I can confirm that we ran a joint operation where we managed to eliminate this outbreak.   However, we are not going to rest, as we will continue to do our best to make sure that there is no other outbreak,’ says Seloba.

Seloba said there had been another outbreak at Mokgalakwena River. The community there had been educated on how to remain safe by not using the river. If they needed to use water from the river they were advised to boil it first.

Seloba said a report of cholera outbreak at Tubatse had been proven to be a false alarm. – OurHealth/Health-e News Service