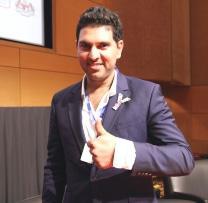 KUALA LUMPUR – If their lives were at stake and someone had to bat their way out of trouble, chances are excellent that any cricket fan would select Indian cricketer Yuvraj Singh to hit the winning six. This week “Yuvie”, as he is known in his home country, swopped his whites for a dark suit and his bat for a microphone when the softspoken cricketer shared details on what he calls the “biggest test of my life” when he was diagnosed with cancer.

Only 19 when he made his debut for cricket mad India in 2000 at the ICC Knockout Trophy, Singh went on to lift the World Cup in 2011 and player of the tournament award.

However, within the same year he went from a high and living his childhood dream to the devastating low of a cancer diagnosis, but eventual cure and a return to the cricket pitch.

“It was hard to accept for me, going from a person who lived a healthy lifestyle and was fun loving, to cancer. It was the test of my life and I think being a sportsman did help equip me for the battle,” Singh told Health-e, shortly after participating in the closing session at the Global Forum on Cervical Cancer Prevention. The forum was taking place on the eve of the 3rd Women Deliver meeting.

“As a sportsman you get used to ups and downs and you fight battles your entire life. But you learn to rise again and come back again,” said Singh.

He speaks honestly about being diagnosed with a germ cell tumour near his lungs and fearing death. “Going through this gives you huge perspective. Initially it was not easy, it was very scary. You are scared to lose your life because in our country cancer often equals death.”

Singh is also cognisant of the fact that he was privileged in a sense that he was diagnosed early and could access the best specialists and treatment, eventually traveling to the United States for his chemotherapy and other treatment.

“I was lucky. I got diagnosed on time and had the money to get treated. There is such widespread stigma when it comes to cancer and because of the belief that it is a death sentence, many people ignore the fact that something is wrong and do not go for treatment. Also, there are many poor places (in India) where there are simply no services,” said Singh.

The cricketer says that the experience has changed him. “I now worry less about sport even though I am as passionate as ever. I also know I need to live in the moment. Cancer sounds very deadly and not many people understand or know if they are going to live or die. In India there is stigma and a belief that you are going to die, so you need to be strong to deal with it. Cancer will definitely change your life.”

Singh recently launched the YouWeCan initiative through the Yuvrah Singh Foundation. The movement is aiming to create consciousness around cancer, prevention, early detection and the fight against stigma. In a couple of months the initiative has screened over 20 000 people, diagnosing 800 with cancer.

“I want people to remember me for always putting up a fight, for never giving up. Keep fight until you die. If you can, we can,” he said.