Phumzile Nkosi (36) has been living with HIV for 12 years, but the added complication of genital warts has made the past year tough. 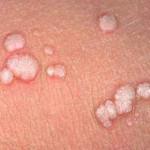 Phumzile Nkosi (36) has been living with HIV for 12 years, but the added complication of genital warts has made the past year tough.

“A few years ago I contracted genital warts and went to the clinic for treatment, I was referred to the hospital. Podophyllin treatment was given to me to apply to the warts for three weeks and the warts stopped growing.

“The warts returned after a year, but instead of going back to the clinic I listened to my mom who said she didn’t believe it was that serious and that I should consult a sangoma first’. The sangoma claimed to cure warts. I immediately started using the traditional medicine as she instructed, but my warts got worst and I was never cured.”

Genital warts are one of the most common kinds of sexually transmitted infections.

Genital warts, like other non-STD warts, are caused by various types of the human papilloma virus (HPV) that infect the top layers of the skin. There are over 100 different types of HPV that may cause warts, but only a small number of strains can cause genital warts. Those that do cause genital warts, unlike other wart-causing HPVs, are highly contagious and are passed on through sexual contact with a person who is infected. HPV types 6 and 11 cause the majority of genital warts.

It is estimated that over 60% of people who have sexual relations with a person who has genital warts will become infected and develop them too. Generally, the genital warts will appear about three months after infection – however, in some cases there may be no symptoms for many years.

Earlier this month Phumzile went to her local clinic and she was referred to Ermelo hospital. “By now it looked like a cauliflower and it itched terribly. The only relief was for me to scratch it. I am currently on treatment hoping this time it will work.” She has also started taking antiretrovirals.

A nurse from Ermelo Town Clinic, who asked to remain anonymous said t was critical for people to seek treatment as it could lead to cervical cancer in women.  “My advice to people who suspect they have contracted any sexually transmitted disease, is to immediately go to your health facility for consultation and get treatment. It is free and the sooner the better.”

Gogo Marry Timande who has been a traditional healer for 32 years commented: “ People have to stop believing and trusting these claims by sangomas who say they can cure STI’s, TB, HIV and AIDS because it’s not true’’.

Recently, a burst pipe sent hundreds of litres of clean water flowing down storm drains in Mofolo, Soweto as residents went without.

Zanele Mhlanga* , 31, from Ermelo in the Gert Sibande district is a mother of three, has been married for nine years and is a business owner. She was diagnosed with HIV two-and-a-half years ago, and believes she was infected by her husband. She tells her story.