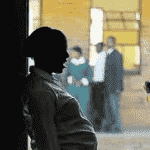 30 % of teenage pregnancies are reported at schools
photo credit: timeslive.co.za

According to Dineo Motshabi, a gender officer from the Department of Education for John Taolo Gaetsewe District 30 % of teenage pregnancies are reported  at schools begin from ages of 12 to 16.

“This is not good because we as the department have plenty of programmes that helps prevent and reduce teenage pregnancy and other youth related risks.”

During the dialogue, the learners put on plays discouraging teenage pregnancy.  Parents present in the dialogue reported being impressed at how well the children were able to dramatise issues, but still fail to implement the message.

Mpho Setlhare a parent said: “Let us walk the talk, the drama is so clear , and educational. Why can’t we learn from what we are acting?”

A pregnant learner from Gamohana Middle School said: “I don’t feel excited about going to school because the other learners display hatred and a bad attitude towards my pregnancy.

“The sad part is that the department and parents will always put the blame on us only and forget to talk to our brothers who propose us for love at early age and bribe us with luxury stuff. Sometimes we are forced to act this way because of our family’s financial challenges and how some of our parents abuse our social grants and don’t give us what we need.”

Pastor Katlego Pule said he strongly believed that if people were able to afford living then chidren would not be influenced by material things and gifts in exchange for sex, and end up being pregnant.