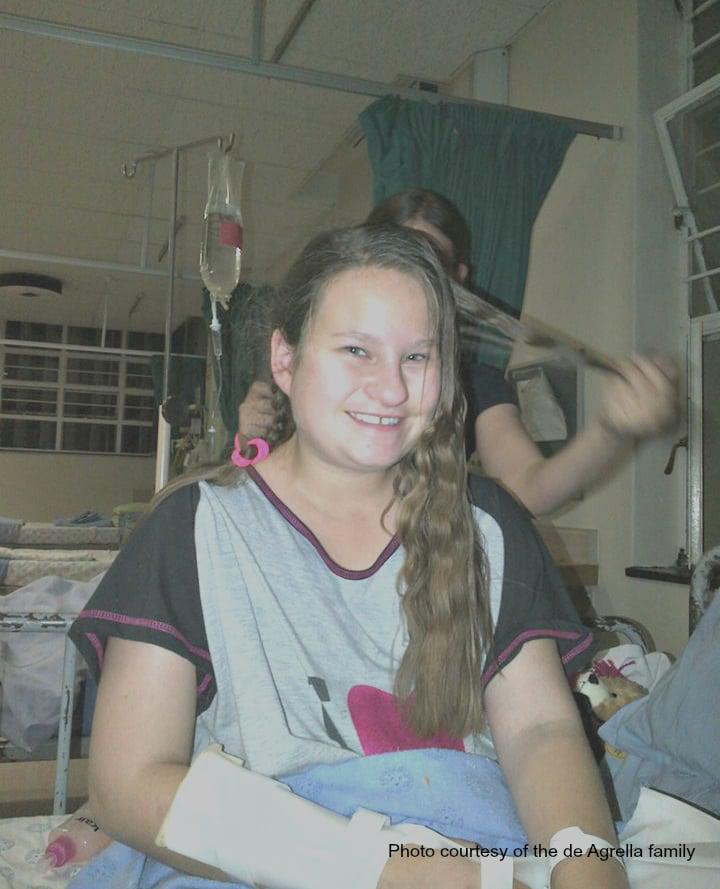 A Johannesburg father talks about how a stroke changed his teenage daughter’s life. 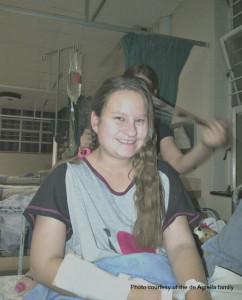 A family member brushes Cassandra’s
hair while she recuperates in hospital.

When Maiya de Agrella, 5, went into the bathroom of her Malvern East home she immediately saw that something was wrong with her older sister, Cassandra.

Maiya ran to get her grandmother, and panic erupted in the house as emergency services and an ambulance were called. The family decided not to wait for the ambulance and put Cassandra in her father’s car, rushing her to the nearby Bedford Gardens Clinic.

After vomiting in the car, a disorientated Cassandra was admitted – but only after the uninsured family found R35,000 to pay admission fees.

It would be almost 24 hours before Cassandra’s father, Dean, would be told what had happened to his 15-year-old daughter.

She had had a stroke.

Cassandra’s story is unusual but not uncommon.

According to the Heart and Stroke Foundation South Africa (HSF), 240 people suffer a stroke every day. That translates to ten strokes every hour in the country. According to HSF, strokes are South Africa’s third biggest killer.

HSF CEO Dr Vash Mungal-Singh said that while many may associate strokes with old age, more people in their 20s and 30s are now being affected. When a stroke hits, it is important to get medical treatment as quickly as possible, preferably within four hours, to reduce the risk of permanent disability.

This was certainly the case for Cassandra.

Two months after surviving a stroke, Cassandra is home with her family. She is able to walk and speak some but is continuing with the speech and physical therapy. According to Mungal-Singh, therapy can play an important role in helping survivors and their families recover after a stroke.

“The potential consequences of a stroke can be devastating,” Mungal-Singh said. “It is important that people know that there is help out there and that with the right amount of therapy and support, stroke survivors can live full and happy lives no matter what their disability is.”

While Dean looks forward to the day when Cassandra can speak more easily, he is grateful that his daughter is alive

“If she can speak to me, I’d be happy with that,” Dean said. “She is alive and I don’t know what more there is to say.”

In the meantime, he and Cassandra have committed to raising awareness about the impact of strokes on people – young or old.

Stroke survivors getting young and younger

According to the HSF, adults may be at risk of strokes if they experience high blood pressure, irregular heartbeats and a hardening of the arteries.

However the foundation cautions that risk factors for adults such as hypertension, diabetes, obesity, tobacco and alcohol abuse area increasingly affecting younger people.

“Up to 80 percent of stroke and heart disease can be prevented by adopting a healthy lifestyle,” Mungal-Singh added.

The HSF says it is important that people are aware of what a stroke looks and feels like. To help simplify the concept, the Foundation uses the FAST acronym: F = Face, A = Arms, S = Speech and T = Time.

Signs to look out for include facial drooping or a lack of mobility in one side of the face, weakness in an arm, and abnormal speech or the slurring of words. If any of these symptoms are observed, the time factor is critical. The faster people react and the sooner a stroke victim reaches a hospital, the greater their chances of survival and minimising disability.

This feature was produced by the Heart and Stroke Foundation South Africa.