The first day of community service can be nerve-wracking, even for the most “battle-hardened” of doctors. 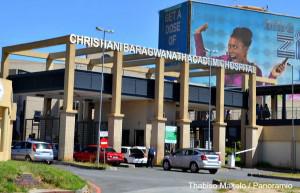 Even among “battle-hardened” former interns – like those who previously served at Johannesburg’s Chris Hani Baragwanath Academic Hospital (pictured) – the first day of community service can be nerve-wracking.

When I arrived just after 6pm for Mdu’s Monday Tae Bo class it was sunny outside and about 30 degrees celsius in his ‘gym’- a small, tiled room in the backyard of one of the village’s few commercial buildings. Despite the sun having set, the temperature has risen by at least a couple of degrees, as a heavy mix of unconditioned air, evaporated sweat and exhaled breath settles below the high windows.

We’re dripping with sweat and jogging on the spot. I look down at the floor as Mdu bounds over to the giant sound system at the front of the room, and changes the track to a techno remix of Ma Makheba’s hit “Pata Pata.”

Without a seconds pause, Mdu is back in the middle of the circle – he’s short, ripped and as wild as they come. He has heavy eyelids, but through the slits his eyes burn bright and white, flicking from one corner of the room to the other. Maybe it’s his bright red boxing shorts that does it, but I can’t help thinking that he looks a bit like the pictures I’ve seen of boxer Jacob “Baby Jake” Matlala when he was in his prime.

“No pain, no gain,” he shouts before repeating the phrase again and louder – this time with gesticulations: “NO PAIN, NO GAIN!”

[quote float=”right”]”The hospital remains a dreaded place to be when your head and heart are not entirely ‘in it.'”

Then the beat drops, and with it, two by two we’re flung into the middle of the circle, like two piggies in the middle.

There’s little to no need for instruction; the steps start organically – like some strange aerobics dance-off. Legs are flying into kicks, arms are “raising the roof,” and hips are gyrating.

Oh wait, there it is, we’re “twerking.” All twenty of us, including the chubby eight-year-old child on my right, the lean boxer on my left, and the three mothers across from me. We’re not just tweaking, dancing and “gyming,” we’re screaming, ululating, gunting and whooping.

Two weeks ago, in Cape Town, I was doing hot Bikram yoga in the mornings. It was quiet and serene, I would leave feeling calm and sip on coconut water whilst driving home before making a breakfast smoothie…. and now this! I feel invigorated, alive, my heart racing in my chest, the music ringing in my ears.

What can I say? Beats Bikram, that’s for sure.

I slept well that night, all credit goes to Mdu. In the days leading up to my move here, I had hardly slept. I had become increasingly more apprehensive about getting back to work.

Even for the hardened amongst us – the Chris Hani Baragwanath Hospital interns who have put in long hours, stitched and re-stitched gaping wounds and seen the worst society has to offer  –  the hospital remains a dreaded place to be when your head and heart are not entirely “in it.”

And for reasons known to most of you, and not worth mentioning here, my head, heart and every other part of me wishes I could have stayed a little longer in Cape Town, where my family gather now.

So it was – with a heavy heart and a racing mind – that I put on my scrubs, flung my stethoscope over my neck (it feels so natural now), picked up my pen and trundled the 100 metres from doctors’ quarters to the hospital entrance to start my very first day of work…