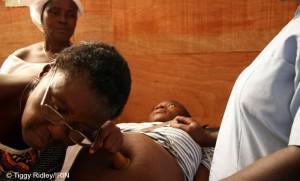 Shamiso Mavuvho is eight months pregnant with her fourth child. She lives in the Zama-Zama informal settlement about ten kilometres outside Pretoria where there is no running water, no electricity and no clinic.

More than twice as many new HIV infections occur in urban informal settlements like Zama-Zama than in the cities they border, according to the latest research by the Human Science Research Council.

While South Africa has charted steady and significant decreases in mother-to-child HIV transmission rates in recent years, about three percent of babies born to HIV-positive mums still contract the virus.

To bring prevention of mother-to-child HIV transmission (PMTCT) services closer to mothers like Mavuvho, the Tshwane Department of Health is conducting outreach to settlements like Zama-Zama.

“We focused on this Zama-Zama community because it’s a small, poor community with fewer services,” said Tshwane Department of Health’s Dr. Manei Letebele. “Although there is a mobile clinic that visits the area twice a month, we felt that there was a need to come here and educate, provide counselling and test for HIV.”

The campaign provides HIV counselling and testing, and referrals for pregnant women who test HIV-positive in hopes of catching women who might slip through cracks in the PMTCT programme.

Falling through the cracks

Mavuvho has been diagnosed HIV-positive but, in her third trimester, still has not started taking ARVs to prevent her baby from contracting the virus.

“I have been told that I am HIV-positive but I am not yet on antiretroviral treatment because (nurses) told me my CD4 count is still high,” says Mavuvho, who attends Tshwane’s Hercules Municipal Clinic.

According to national guidelines, people living with HIV can start ARVs when their CD4 counts – a measure of the immune system’s strength – falls to 350 or below.

While Mavuvho may not be eligible to start life-long ARVs for her own health, 2013 PMTCT guidelines say that HIV-positive mothers like her should start ARVs to protect their babies as part of PMTCT services from their first antenatal visit regardless of CD4 count. New mothers with CD4 counts above 350  should continue taking ARVs – preferably the country’s newly introduce three-in-one fixed dose ARV – until one week after they stop breastfeeding.

Mavuvho says she is just taking supplements at the moment but will try to continue visiting the clinic, which is difficult without money at home.

“My husband and I are not working but we try to get money for transport to the clinic,” she told OurHealth. “I wish the clinic was nearer because I spend R26 for transport to Hercules Clinic, which is eight kilometres from here.”

In some ways, Mavuvho is not unique. For about a third of South Africa’s expecting mothers, their first visit to an antenatal clinic will be in the their third trimester of pregnancy, according to Department of Health statistics released at the SA AIDS Conference in 2011.

With the birth of her child just a month away, she says she is committed to getting the best care for her baby.

“We have no money but my husband will try harder,” she says. “I cannot miss a clinic visit at this stage of my pregnancy.”