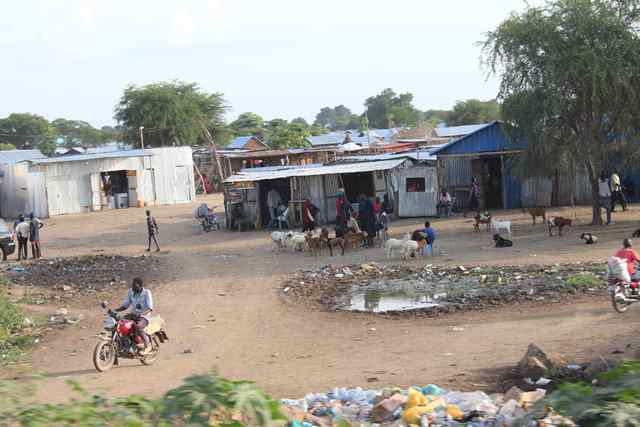 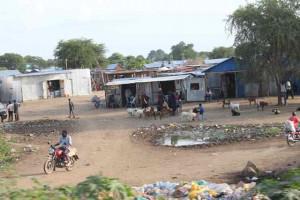 Life on the outskirts of Juba, South Sudan

Nyariek Koang disappeared in February after leaving a refugee camp in Juba to walk part of the way into town with her husband.

“She must have been killed by soldiers on the road while she was walking back,” says her sister, 23-year-old Nyajime.

In December, heavy fighting forced Nyajime, Nyariek and five other siblings to flee from their rural home in the country’s oil-rich north. They found refuge in a tiny plastic shack in the refugee camp alongside United Nations House, the logistics centre for the UN’s humanitarian mission in South Sudan.

After fighting for 25 years in Africa’s longest civil war, South Sudan won independence from northern Sudan in 2011 and there were high hopes that one of the continent’s least developed countries would finally start to thrive.

In the South Sudanese capital of Juba alone, some 80 000 refugees are being accommodated in three camps alongside UN bases after fighting erupted within the military on 15 December last year.

Around one million South Sudanese have been displaced and 50 000 children – mainly in rural areas – will die of starvation within months if transport routes are not reopened, according to the UN Children’s Fund (Unicef).

Cholera and malaria plague the country, as the rainy season turns the ground into muddy disease incubators.

Abandoned villages are evident when approaching Juba from the air, and the few long orange roads that pencil through the fertile lands along the White Nile and its tributaries, are deserted thanks to the renewed war.

The current conflict started after President Kiir, who is seldom seen without a black cowboy hat, suspected Machar of plotting a coup in mid-December and ordered his presidential guard to be disarmed.

But guards from Kiir’s Dinka tribe kept their weapons while those from Machar’s Nuer tribe were disarmed. Nuer soldiers then revolted, seizing the Juba armoury and sparking conflict that spread throughout the country.

Two ceasefires and an agreement signed on 11 June to form an interim government within 60 days have not yielded any results so far.

Civilians believe that they have simply become victims of a power struggle stemming from old rivalries in the Sudanese People’s Liberation Army (SPLA) – and a new greed to control the rich oilfields in Unity and Upper Nile states.

As the conflict fractures along ethic lines, the reports on atrocities mount.

Many Nuer men get facial marks in their teens to mark their transition to manhood. The six horizontal “frown lines” on their foreheads make them easy targets for tribal rivals.

In late December, 252 Nuer men were rounded up and locked up in a police station in the market area of Juba and repeatedly shot at through the windows until all but 12 were dead, according to a man interviewed by UK’s The Guardian newspaper. He said he had survived the attack by lying under dead bodies for two days.

Meanwhile, when rebels seized Bentiu in Unity State, hundreds of Dinka were reportedly killed while sheltering in a mosque and a church, and the UN reported finding a mass grave containing about 75 bodies.

Juba is full of heavily armed soldiers, many of whom dash around in jeeps and trucks mounted with heavy sub-machine guns.

The city is under a curfew from 11pm until dawn, but UN staff members have to be indoors by 9pm as irregular military salary payments mean that many of soldiers moonlight as criminals by night.

In this extremely patriarchal society, women are mostly indoors doing household chores with men sitting on plastic chairs under trees. Only men drive the hundreds of motorbike taxis dubbed “border-borders” that hoot their way through the streets, sometimes carrying female passengers sitting side-saddle. Few girls attend school and polygamy is the norm.

In the conflict, women are simply collateral damage, to be raped by soldiers marking their territory. Nyariek was probably raped before being killed.

Rape, say many aid workers and UN staff, is “acceptable” in many parts of the country even in peace-time.

Although the Transitional Constitution of Africa’s newest country outlaws rape, “this it is not put into effect”, says Fabiola Ngeruku, an expert in gender-based violence currently based in Juba.

At a workshop of 30 journalists, not a single one could recall any man ever being charged and convicted of rape.

“Even if a woman lays a charge, the police would see it as a matter to be solved by her family,” explains journalist Chris Amanjur. Last year, he reported on a 15-year-old girl who had been raped and impregnated by an older man.

“Her family went to the man and he agreed to marry her,” says Amanjur. “After the girl had given birth, her family told her to go and live with the man who had raped her.”

HIV/AIDS is on the rise, with up to 9 percent of the military in Juba reportedly living with the virus.

Reliable figures are hard to come by, but extrapolating from HIV testing of pregnant women in 2012, the South Sudan AIDS Commission estimated that 153 000 people were living with HIV that year in a country of approximately 11-million. This number is rising by around 16 000 a year, and much of the transmission is driven by the endemic rape. Yet fewer than one-in-10 women know how HIV is transmitted.

Lole Laila Lole, who has been living with HIV for over 10 years, says health workers show “the worst discrimination of all” towards people with HIV, usually refusing to treat him once they learn of his HIV status.

Journalists too face difficult times. The Citizen, which has an independent television station and a newspaper, was taken off air for months after it broadcast an interview with one of the rebel leaders.

“Now we are back on-air but we are just broadcasting soccer and business news,” says Citizen journalist Michael Mariak.

Oliver Modi, president of the Union of Journalists in South Sudan, said the media faces two major challenges: an unsafe work environment and a lack of training.

“There is a lot of intimidation and harassment especially by the security forces and police,” says Modi. “They confiscate newspapers, and arrest editors and journalists. But there are no laws for journalists. The media bills have not been passed yet, so they don’t know what to charge you with.”

Juba University only offers a communication course, so young journalists are “untrained”, says Modi. “This reflects in their work. There is a lack of professionalism. They don’t know how to balance stories, and there is bias.”

Modi studied journalism in Tanzania, while Amajur and others qualified in Uganda. However, journalists say it is very difficult to make a living, even if they are qualified. Modi, who was educated in Tanzania, supports his family by farming, while others say they can go without being paid for months at a time.

Meanwhile, South Sudan’s Deputy Minister of Information, Rachael Nyadak, described the media as “one of the children of this government” at a recent workshop called by UNAIDS to educate journalists about HIV and AIDS.

“And when a child is not singing the song of the parent, the parent is concerned,” warned Nyadak rather chillingly.

At this stage, both major players are boycotting the peace talks to form an interim government. The rebels want the talks to be confined to the two warring parties and exclude religious and civic groups, while the government took offence to chief negotiator Mahboub Maalim saying that it was “stupid” for parties to believe that they could achieve a military solution.

Africa’s newest country seems unready to call itself a nation.