The EarthChild Project is teaching yoga, meditation and healthy living to children in Khayelitsha and Lavender Hill – two of the most dangerous communities in the Western Cape 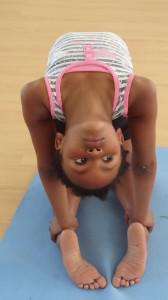 Kamvalethu Sabela has an extensive vocabulary and a quiet intensity that makes him seem older than 12.

Three years ago, Sabela came into contact with the EarthChild Project when he changed schools, and as he had never heard of yoga and meditation, he joined them.

“EarthChild has taught me how to concentrate, how to relax and how to breathe properly. And my marks have improved,” says Sabela, now in Grade Seven at Sakumlandela Primary School.

“When I get nervous in an exam, then I just breathe in and out slowly and then I can answer the questions,” adds the star pupil, who has a full bursary to study at Wynberg Boys’ High School next year.

In an essay pinned up in the yoga class, Sabela writes that “yoga makes me happy because it makes me able to communicate with my body… and it made me realise how precious my body is”.

EarthChild’s Khayelitsha facilitator, Nokuphiwo Jada, says she loves to see how the children’s confidence grows, as their bodies get stronger and they learn how to calm themselves with breathing exercises.

The project offers the children a rare respite from life in the over-crowded and violent township, where a number of the children have confided to Jada that they have already been sexually abused.

In a prefabricated classroom alongside a noisy netball field at Sakumlandela Primary, 14 little girls chatter and giggle as they prepare for their yoga lesson.

Jada sits on a yoga mat and the girls from Grades Two to Four, fan out in a circle around her.

Shirley Qotsini, a friendly 10-year-old, asks if she can help to teach the class while seven-year-old Sisonke Sifo also chips in with poses.

“Yoga makes me happy, flexible, healthy and strong,” says Qotsini. She lives with her cousins, who also d yoga, and their grandmother, who has also become interested in yoga through the children.

Qotsini’s friend, Lusanda Mbadamana, 9, started yoga this year and likes the way that “the breathing can make my heart slow down”.

The yoga has been adapted to be fun for the children, who are encouraged to make animal noises as they do poses called “downward-facing dog” and “cobra”.

Sometimes the lessons follow themes such as “going to the beach”, and the yoga poses are adapted to mimic surfing, diving and swimming.

When they do standing poses that need a lot of balance and concentration, the children hold hands.

At the end of the 30-minute lesson, the girls sit cross-legged on their mats holding hands and singing over and over: “I am happy, I am good”. Qotsini then says “the light in me sees the light in you”, the others repeat this and the class is over.

The shrill chatter before the class has given way to quiet contentment as the children smile dreamily, put on their shoes and head off to their homes, mainly tiny shacks built right next to one another.

Two weeks away from giving birth to her second child, Jada is still nimble and supple.

“This is not really my job, this is part of my life,” says Jada, who first became interested in yoga a decade ago through an organisation called Art of Living.

“Yoga is not part of our culture but I found it interesting,” says Jada. “ At the time, I was always sickly. I had headaches, asthma and ulcers. I was also anxious and tense. After doing yoga, I noticed changes in my body and my life. I was happier and smiling more.”

While exploring yoga, Jada met Janna Kretzmar, and when Kretzmar decide to start EarthChild eight years ago, she asked Jada to join her.

EarthChild now operates in three Khayelitsha primary schools and five in Lavender Hill – two of Cape Town’s most violent communities – and tries to “promote a holistic, balanced lifestyle” to the 2 000 children it reaches, says Kretzmar.

“We try to get to the root causes of stress and illness, social injustice and the destruction of the environment that are caused by our loss of connection to ourselves, each other and the environment,” she adds.

“The feedback from parents and teachers is that their children are concentrating better, fighting less and taking more responsibility. And all our children are getting higher marks.”

Aside from yoga and meditation, the children can join eco-warrior clubs that campaign for recycling in their schools, learn how to grow vegetables and how to take care of their environment. EarthChild also organises monthly hikes to places such as Silvermine and Newlands Forest.

“We try to work in schools where the principals are motivated and supportive,” says Kretzmar, who was inspired to start EarthChild after spending time in an eco-village in Brazil.

“Everything we do is linked to the national curriculum in terms of literacy, numeracy, natural science and life orientation,” says Kretzmar. “We are working with an educational consultant to develop a curriculum so it can be used in other places.” – Health-e News Service.

Being young is often associated with risky behaviour – and research is showing that in South Africa the youth often take astounding sexual risks. But is this intentional dare-devilish behaviour?

As the new health-e Tobacco Control and Cancer journalist, Lesley was surprised to find herself smoking in this posed pic. Here is the first of her blogs.

Holiday lights and decorations are already popping up across South Africa. As children anticipate gifts and a holiday from school, families and friends will gather for meals together to toast the season. Tragically, the cooking of food is actually a gateway to a leading cause of child death, writes Keith Klugman.