Vaginal gel fails to protect against HIV despite earlier trial

25th February 2015 | Kerry Cullinan
While the study produced disappointing results overall, it did show that HIV infections were halved in women who used the ARV-containing gel consistently and correctly

In a blow for HIV prevention, a vaginal gel that showed some effect against HIV in an earlier trial has failed to protect women in a big follow-up trial.

There was no difference in HIV infection rates between the women who got the gel containing the antiretroviral (ARV), tenofovir, and those who got plain gel in the Phase Three trial involving over 2000 women.

But the trial’s failure was partly linked to the women’s inability to use the gel properly before and after sex. Only one-fifth of the women used the gel consistently with sex, while around 65 percent of the women used it sometimes.

“This was not the result we wanted, and reinforces the fact that HIV prevention is difficult and interventions to protect women are complicated,” said Professor Glenda Gray, President of the SA Medical Council.

The results of the trial – called the Follow-on African Consortium for Tenofovir Studies (FACTS) – were announced last night at an international AIDS conference in Seattle.

There were high hopes that the tenofovir gel would be able protect women from HIV infection after a successful trial of the gel in 2010. Conducted among 900 KwaZulu-Natal women and run by the Centre for the AIDS Programme of Research in SA (CAPRISA), the 2010 study recorded that HIV infection was reduced by almost 40 percent in women who used the tenofovir gel.

But in 2013, a large African trial of the same gel called VOICE found no difference in HIV infection rates between women who used the tenofovir gel and those who used the plain gel.  However, most of the women in the VOICE trial did not use the gel although they claimed that they did.

“The product failed the women, the women did not fail the product”

Gray acknowledged that the women in the FACTS trial – aged between 18 and 30 – “used the gel imperfectly”, but stressed that “the product failed the women, the women did not fail the product”.

After the VOICE trial blamed African women for not using the gel properly, “we threw the book at adherence, doing as much as possible to ensure that the women used the gel before and after sex”, said Professor Helen Rees, head of the Wits Reproductive Health and HIV Institute, who led the all South African study at nine different sites with Gray.

Women enrolled in the FACTS study were extensively counseled by two different people at their monthly check-ups, belonged to adherence clubs and received reminder smses.

“A product applied around the time of sex may be suitable for some women, but it did not meet the needs of the majority in our study, most of whom were young, single and lived with their parents,” Rees told Health-e News. These young women did not have sex at home and applying the gel in other settings was hard for them.

The HIV infection rate during the trial was high, with 61 infections in the group that received tenofovir and 62 in the group that got the plain gel. [quote float= left]”We must do better in developing and then delivering options that young women especially will want and be able to use”

But HIV infection was halved in the group of women who had detectable tenofovir in their vaginal fluids.

Director of CAPRISA Professor Salim Abdool Karim there was “now good evidence that tenofovir, either in tablet or gel form, prevents the acquisition of HIV if used consistently”.

“The biggest challenge we are facing is the need to better understand what women would be willing to use consistently for HIV protection,” Abdool Karim told Health-e News.

Dr Francesca Conradie, head of the Southern African HIV Clinicians Society, said although the FACTS trial was “conducted at the highest level of scientific rigour, disappointingly, the results were not the same as CAPRISA”.

“An HIV prevention intervention must suit the real Iives of those that is it aimed at. In this group of women, being able to use a gel before and after sex was difficult.  And even when it was used, it was only moderately protective,” said Conradie.

“Clearly, young women most desperately need new prevention options, but they have the most difficulty navigating correct and consistent use of tenofovir gel — and condoms! We must do better in developing and then delivering options that young women especially will want and be able to use,” said Warren.

Two other HIV prevention products are currently being tested. One is a vaginal ring with ARVs that can stay inside a woman for a month and the other is a three-monthly injection of the ARV drug, cabotegravir. – Health-e News.

Edited versions of this story first appeared in the 25 February editions of The Star, the Pretoria News and Cape Times newspapers.

Over the last few weeks this feature has dwelt on the country’s revised prevention of mother-to-child HIV transmission (PMTCT) programme. But some of us might ask: Why is the revision of the programme so significant?

MBABANE: (IRIN) – Anecdotal evidence that entrenched cultural beliefs among Swazis actively encourage the spread of HIV/AIDS has been confirmed by a joint government and UN report. 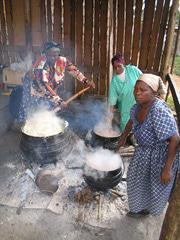 A single dose of two antiretrovirals given to mothers shortly after giving birth has shown to reduce the chances of the women developing later resistance, a new study from Zambia has shown.