Home » Villagers spend ‘as much as R40 million’ on emergency transport

Eastern Cape villagers are being forced to pay up to R800 each way to transport sick family members to clinics and hospitals as bad roads, ambulance shortages and poorly trained staff conspire against critically-ill patients fighting for their lives. 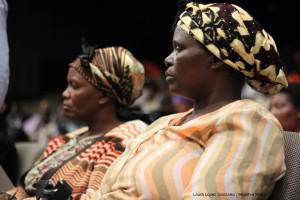 Nowayithi Mbangasini (right) from the Eastern Cape’s Xhora Mouth recently lost her child. She said she struggled monthly to raise the R800 to take the child to hospital and was often ridiculed by nurses for relying on grants

Mantongomani Nodanga has lived in Xhora Mouth for 70 years. He has never seen an ambulance. Fellow resident Nowayithi Mbangagini said she first heard of ambulances yesterday. Mbangagini recently lost her 7-year-old child after a long illness and spoke on the final day of the South African Human Rights Commission’s hearing in to emergency medical services in the Eastern Cape.

The hearing’s findings will be released in two months’ time and are likely to feed into a larger, national hearing on access to the right to health later this year, according to Human Rights Commissioner Pregs Govender.

“Every month, I had to take the child to hospital,” said Nodanga who added that she struggled to find the R800 needed to take the child to monthly appointments and faced ridicule from nurses when she arrived because her family survives on grants. “The nurses will ask you, ‘don’t you have money from government to attend to this person?”

“You will just break down and cry when they say such things,” she told Health-e News. “My child died last year.”

Wiping tears from her eyes as she struggled to control her emotions, Nodanga was one of dozens of rural Eastern Cape residents who testified before the commission. The commission’s hearing revealed a range of issues conspiring to create a deadly lack of not only ambulances but also patient transport in the Eastern Cape including a shortage of working ambulances, poorly trained call centre staff and poor roads.

Dr Prinitha Pillay works for the non-profit Rural Health Advocacy Project and served as an external panellist at the hearing. Based on community testimonies, Pillay estimated that poor, rural populations in the Eastern Cape could be spending as much as R40 million out on private cars in the absence of ambulances.

“If the province has around seven million people and just 10 percent or a fraction of this population is spending R800 for transport to hospitals… that’s at least 40 million rand out of pocket,” Pillay said. “That doesn’t sound just catastrophic, that sounds fatal.”

According to General Manager of Road Planning with the Eastern Cape Department of Roads and Public Work Craig Mclachlan, the province has the worst gravel roads in the country. The provincial government has begun to prioritise road works on those leading to hospitals and schools, Mclachlan added.

However, he estimated that it would take 60 years before the province’s roads caught up to national standards.

Provincial departments for health, roads and public works as well as planning and finances will now have two weeks to supply the commission with additional information before the Chapter 9 body begins drafting its final report. – Health-e News.