Almost a year after hundreds of patient files were found stacked in the toilet of a Soshanguve clinic, renovations to expand the township’s Block X Clinic have begun. 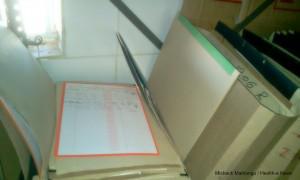 In September 2014, OurHealth discovered hundreds of patient files stacked in the clinic’s loo. At the time, health workers claimed the stacks were comprised of old, disused files that had to be moved out of the clinic’s formal storeroom due to space constraints.

Patients were not impressed.

“The clinic does not respect our privacy,” said cancer patient Sakkie Marerwa at the time the files were discovered.

“Even though they are dormant files, the fact is that our health information is in there,” Marerwa told OurHealth. “People could take (that information) to social media and expose our confidential data.”

Almost a year later, work has begun to expand not only the clinic’s cramped storage room but also its waiting room. Clinic committee volunteer Evelyn Mokgopha called the move a product of a long struggle by community members who complained not only to district health officials but also to members of provincial legislature about the clinic’s cramped conditions. This formed part of a community-drafted action plan to address clinic issues.

He added that community mobilisation also helped develop a new partnership between the clinic and the neighbouring Open Bible Church, which has opened its doors to clinic patients arriving as early as 4:30 am to queue for services. Now, early patients can wait inside the church until the clinic opens. The church has also agreed to let the clinic use its facilities as an extra waiting room during the day while the clinic’s own waiting room is renovated.

According to a clinic health worker who asked not to be named for fear of victimisation, renovations have not disrupted service delivery and the staff has welcomed the improvements.

“We are delighted to see some developments in this facility,” she said. – Health-e News.