Home » Where there are no ambulances 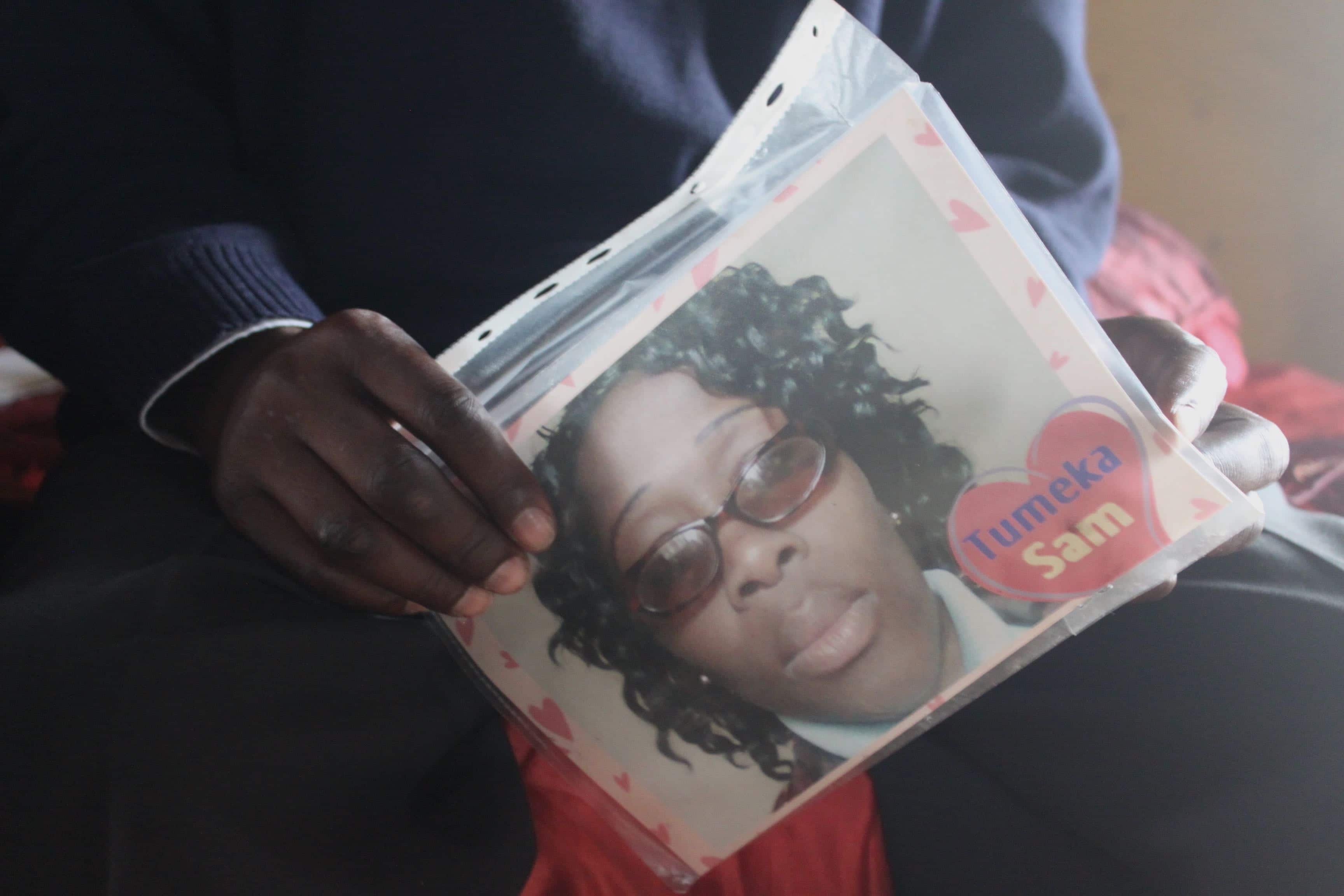 In the Eastern Cape, 60-year-old men and women report never having seen an ambulance in their lives as a deadly mix of management and money fuel poor access to emergency medical services.

Xolisile Sam anxiously re-dialled 112 on his cellphone. He was afraid he was watching his little sister Tumeka die. 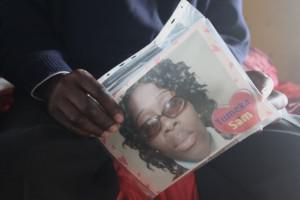 Xolisile Sam holds a photo of his late sister, Tumeka

Tumeka left her job as an East London security guard and returned home to her village of Isilatsha after developing tuberculosis. Despite treatment, her condition had deteriorated. Her round face had grown gaunt as if a tide had washed over her and then receded, revealing sharp cheekbones. Bed-ridden, she had developed bedsores and, now, was racked with seizures.

It was the seizures that scared the Sams but when Xolisile called an ambulance on 26 September 2014, he was told help was unlikely to arrive.

“They told us they did not come for bed-ridden patients, and that they came only for injured people and not to take people from their places to hospital,” said Xolisile, who added that dispatchers advised him to take Tumeka to the nearest clinic.

“I explained that a car to the local clinic would cost R150 and to (Mount) Frere Hospital it would cost R500,” he added. “I could not afford to pay these sums. I was instructed that we could wait at the nearby local school and that the ambulance might come, but it was not likely.”

The family walked to the primary school where they waited for hours in hopes of being able to show an ambulance the way to their home.

He was asked if this was the first time he had phoned.

At home, his elderly mother crouched beside Tumeka’s bed, tending to her daughter who was writhing in pain and crying for an ambulance in between violent seizures. Returning from the school, Xolisile was increasingly worried.

Nearby in a suitcase tucked beside a water-stained bureau were scarce family photos of Tumeka as a girl – a fiercely loyal teen who would do anything for a friend even if it involved a fight. Her loyalty earned her the reputation of village bully.

But for Xolisile, other memories replayed in his mind, scenes that seemed to map themselves on the topography of the rondavel’s concrete floor.

He could almost still see his mother alongside his other sister, encouraging her to push as his sister gave birth, clutching the beam supporting the thatched roof after an ambulance failed to arrive.

In the corner, between the door and the house’s sunny yellow walls, Xolisile could remember his eldest sister, Nolusapho Diyani, giving birth alone, again with no ambulance in sight. In this scene, Xolisile’s mother stands farther off, too afraid after the previous home birth to help. Xolisile slept in his clothes that night, ready for an ambulance that never came.

Xolisile was elected to represent Isilatsha and testify before a South African Human Rights Commission (SAHRC) inquiry into the Eastern Cape emergency medical services (EMS) in March. The East London hearing drew hundreds of people from across the province.

In affidavits submitted to the commission, 60-year-old men and women reported never having seen an ambulance. Others like Nomfundo Mbelebele said EMS dispatchers often told rural community members to bring the sick and dying to the nearest road. Mbelebele testified that she watched her father succumb to cancer after EMS dispatchers told her his only chance of getting an ambulance would involve the dying man walking from his rural homestead to the nearest gravel road.

“You are very lucky if you are told to go wait on the road because usually the phone is not answered,” said James, who added that community health workers had been forced to deliver babies and watched those babies die in their arms when EMS did not respond. “I am not trained to deliver a baby, I am trained to ask you if you have taken your medication.

“Sometimes the nurse will use her own car (to take a patient to hospital) because the nurse cannot endure to see someone in pain,” added James, describing how even local nurses could not reach EMS. “We used to think that the phone was never answered because we are uneducated and live in villages, but when even the sister cannot get an answer …”

Testimonies smacked of “contempt for the poor”

“There is an element of contempt for the poor, which is very real and impedes access to the human rights contained in our Constitution,” Govender said at the hearing. “Government has to correct this stigma that by getting a grant you are taking a huge amount of money from government … and therefore anyone who speaks to you has the right to speak to you with contempt – whether it’s an official at a call centre or anyone else.”

When asked whether anyone had, like Xolisile and James, phoned for an ambulance that never came, a quarter of those in the East London auditorium raised their hands.

The SAHRC released its roughly 100-page report on its investigations into the poor state of the province’s EMS on Wednesday. The report details how poor management, budget shortfalls and shortages of vehicles and properly trained staff kept emergency medical care out of reach for many Eastern Cape residents.

While it has increased its fleet by about 45% since 2014, the province would need to add more than 200 new ambulances to reach national targets.

Those scarce ambulances running the gauntlet of the province’s chronically neglected rural roads face tough conditions. The province has the third-worst network of paved roads in the country, according to the Eastern Cape roads and transport department’s Craig McLachlan. The gravel roads that connect many rural communities to paved roads are the country’s worst, McLachlan said in March.

As of late June, about 9% of the ambulance fleet was not operational, according to Eastern Cape health department spokesperson Sizwe Kupelo. Kupelo added that just two months after the hearing the department had leased 178 ambulances and hired 720 new EMS employees. The department also contracted medevac helicopters based in Port Elizabeth, East London and Mthatha. The department also plans to prioritise a new computer system to help what have been poorly equipped emergency call centres better manage calls and has pledged to procure more vehicles for non-emergency patient transfers. These ‘planned patient transfer’ vehicles serve to transport patients between facilities.

Better staffed and trained emergency call centres are just one of the commission’s recommendations for the Eastern Cape alongside better and more consistent reporting of its EMS department outcomes, such as response times.

However, the SAHRC report notes that these kinds of vehicles remain limited to facilities, meaning rural patients must still spend money and travel long distances to arrive at pick-up points. Additionally, only 60 ambulances in the largely rural province are 4x4s.

The commission has also cited serious shortfalls in spending despite claims by the department that it lacked money to purchase new ambulances. Between 2010/11 and 2012/13, the department’s EMS programme failed to spend about R94-million, according to commission documents.

Underspending is only part of a complex equation of factors stifling EMS in the province, according to independent budget expert Debbie Budlender.

“The department cannot carry the full blame for challenges,” Budlender said in her submission, describing how varying population estimates have reduced the Eastern Cape’s allocation from the Treasury.

However she added that money was no cure-all.

“The Eastern Cape department of health is not making full use even of the inadequate resources made available to it,” she said. “An increased budget will not solve the problem in EMS in the Eastern Cape, however it is also true that the problem will not be solved without an increase in the budget.”

Meanwhile, rural households are spending up to R800 each way to hire neighbours’ cars to take family members to hospital in emergencies. Families’ inabilities to pay have helped spur an increase in loan sharks who typically charge 50% interest on loans.

Nofundile Sipatana lives in Nqileni village, one river, several hours’ walk and a taxi ride away from her nearest hospital outside Mthatha. She is living with epilepsy and is plagued by seizures.

“I usually feel sleepy and sometimes I experience a severe headache … that’s when I start to be attacked,” said Sipatana, who heads a household of seven children and four grandchildren who subsists on child grants. “When I wake up, the house is full of people assisting me.”

A severe seizure can leave Sipatana immobile for days. When this happens, her frightened children go door-to-door, pooling money from family and neighbours to hire a car to take her to Madwaleni Hospital.

“We have never seen an ambulance in this area so my children and my neighbours together with my relatives don’t bother to call an ambulance,” she said.

When the collection comes up short of the R600 required to hire a car, the family turns to the local loan shark like many others.

When families like the Sipatanas spend more than 10% of their household income on healthcare, researchers dub it a “catastrophic expenditure” because it is likely to lead to debt, and shortages of food and basic necessities.

At the Sipatana home, the kraal – once full – stands empty save for a handful of an uncle’s cows.

“There was a time when I was not able to finish paying the loan shark’s interest and that’s when we called a family gathering and decided to sell the sheep and goats,” Sipatana said. “Now they are gone because I wanted to settle the amount.”

“I am the poorest of the poor in the village because I used to have herds, but now I sold them because of my poor health.

“I want to rebuild, to start again to look after sheep and goats … all that was left by my husband,” she adds. “I want to start again so that it can be our legacy to our grandchildren when I am not here.”

Numerous studies have shown that the selling of productive assets like livestock can plunge families into a poverty trap It is often difficult to escape.

Tumeka Sam was taken to hospital five days after her brother Xolisile first called an ambulance. She died on 7 October 2014, days after reaching Mount Frere Hospital.

Her older sister, Diyani, continues to blame the health department. “Deep down in my heart, I think we should still be living with my sister,” she said. “If the department of health could have responded earlier, Tumeka would still be with us.”

The bricks Tumeka bought to expand the family house still stand stacked in the yard.

“She had big dreams, big dreams. There are no other words to explain it,” Xolisile says. “She wanted to develop everyone.”

He and Diyani recently visited Tumeka’s grave for the first time since her funeral, where they spoke to her about the commission’s hearing and the hope it has given them.

“I feel like I am doing something,” Xolisile told Tumeka. “I am not feeling like I am afraid.”

For the Sams, the commission has given them hope that other families will not go through what they went through.

“I was very grateful when my brother stood up at the podium and stood up for our pains and for our challenges as a community and as a family,” Diyani said. “Now that we have visited East London for the hearing and expressed how her death happened, I know that there is a light at the end of the tunnel and that this situation is not going to happen to another person.”

An edited version of this story was also published by the Daily Maverick.