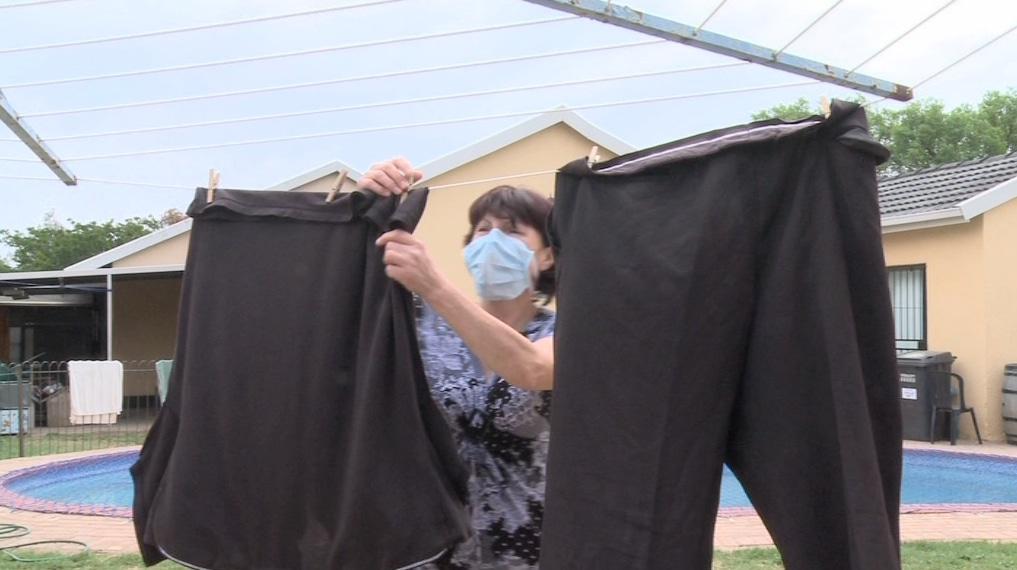 Two women wage a daily struggle against toxic dust entering their homes and lungs, the legacy of mining on the West Rand, which yielded gold necklaces for some and bleeding sinuses and kidney disease for others.

On windy days, Mary Roets wears a surgical mask in her home in the Krugersdorp suburb of Mindalore. She washes her pots before she uses them and avoids hanging her wet laundry out to dry outside. She is waging a daily war against toxic dust.

Despite Chamber of Mines guidelines stipulating that mine dumps must be at least 500 metres away from any human settlement, the width of a single suburban tar road is all that stands between Roets’ front door and a large mine dump.

“If you open your mouth, you can taste you’ve got sand in your mouth. It’s hanging in the air, you’ve got dust in your mouth and all that toxic waste in there,” said Roets, who has lived in Mindalore for 32 years. “We need to spring clean our houses from top to bottom to get rid of all that sand. No wonder the people are sick.”

On windy days, dust from the mine dump opposite the road blows through cracks in door and window frames into Roets’ home and invariably into her lungs. Outside, a layer of dust coats the water in her swimming pool.

More than a million Gauteng residents are exposed to high levels of uranium daily from about 400km² of mine tailings sprinkled around the province. Experts estimate these old tailings or “mine dumps” are laden with 600,000 tons of radioactive uranium. Often occurring naturally alongside gold, this uranium has been brought to the surface by gold mining over the last century.

Uranium is passed on to humans either through the inhalation of fine dust particles from these tailings and can be blown as far as 20km on a windy day, or when mine water seepage enters rivers. 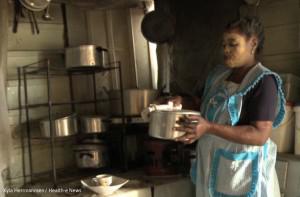 Patience Mjadu cleans her pots constantly due to the high volume of dust in Tudor Shaft.

Well-documented health risks associated with exposure to high levels of uranium include kidney damage and disease, neurological problems and cancer. It is also an endocrine disrupter that mimics the hormone, oestrogen, which is particularly harmful to pregnant women as it can cause birth defects and developmental delays in their babies.

An average of 42 tons of dust – both toxic and potentially radioactive – enters the air in the West and Far West Rand every day. In recent years, advances in mining technology have led to the re-mining of many of the mine dumps in Gauteng, which threatens to release more radioactive dust into the air, according to Mariette Liefferink of the nongovernmental organisation Federation for a Sustainable Environment (FSE).

“The re-mining obviously liberates the dust, so communities’ main concern is the inhalation and ingestion of the dust,” Liefferink said. “The dust is not merely nuisance dust…the dust contains toxic metals and also possibly radioactive metals. That would therefore expose the communities to high risks.”

In Mindalore, the re-mining of a previously closed mine dump yielded an upsurge in the amount of dust swirling around in the air.

According to mining company behind the mining operations in Mindalore, Mintails, mining at the site was completed ahead of schedule in December 2014. The company adds that its mining operations were accompanied by the use of water trucks in an effort to control dust levels and that it monitored dust levels in accordance with regulations.

In August, the company began work to rehabilitate the site and fill in holes left by mining. This work is expected to be completed in January 2016, according to Mintails. The company adds that its mining rights for the land allow for mining to resume in the future.

Mintails also stressed that it does not own the mine tailings in the area but that it was aware that the tailings were slated to be removed.

Roets said that she has already seen the effects of the dust, which wrecks havoc on her sinuses and leads to nose bleeds.

“When you wake up in the morning, your whole mouth is full of blood, your pillow is full of blood – it’s bad,” explained Roets, the volume of her voice rising in frustration. “You feel like somebody that’s got asthma, that’s how bad it really is.”

Not far from Roets’ suburban street, Patience Mjadu also routinely cleans the dust off her cooking pots before she prepares a meal. Mjadu is used to this unrelenting dust. She has been resident of the Tudor Shaft informal settlement for the past 15 years.

“All the pots, when you open them there’s dust on the lids,” she said. “When you open them, dust gets inside in the food so that is why we can’t get better in this place. We’re always get sick.”

The dull-coloured zinc shacks housing Tudor Shaft’s 1800 residents stand in stark contrast to the luminescent yellow sand upon which they are built. Children play energetically, running around and kicking up the sand under their bare feet while hungry dogs scavenge through the litter lying around on the yellow soil.

This soil contains traces of uranium and is emitting high levels of radiation. In fact, some academics say that residents of Tudor Shaft are exposed to higher levels of radiation than communities affected by the 1986 Ukranian Chernobyl nuclear disaster that released vast amounts of radioactive particles into the atmosphere after an explosion at the nuclear power plant.

Recorded radiation levels at Tudor Shaft have been charted levels almost double those recorded after the Chernobyl disaster.

Mjadu said Tudor Shaft residents battle with skin rashes, breathing problems and sores due to their close proximity to the toxic sand. The shacks do not have concrete floors so residents are quite literally living on top of this hazardous soil with no barrier of protection.

According to Liefferink, it’s most often poor communities that bear the brunt of mining’s impact.

Not only a nuisance in people’s homes and for their lungs, the toxic dust settles on top of subsistence crops and is inhaled by livestock. Given these factors, Mjadu and her neighbours face immense exposure to harmfully high levels of uranium. Not only are they inhaling radioactive matter, they are ingesting it.

“What people often see is the gold necklace or the gold ring, which is glamorous and beautiful, but it comes at a price. It comes at a cost,” concludes Liefferink.