Home » Children back at school after desk delivery

About a week after parents pulled children from a Limpopo secondary school to protest a lack of desks, kids are back at school but about 70 percent of children in need of desks are still going without. 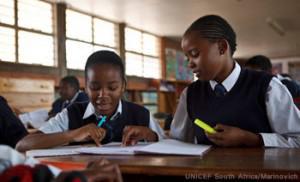 The Department of Education delivered 250 of the 800 desks needed Saturday. It has promised to deliver a further 500 desks by Friday. (File photo)

Last week, parents of learners at Limpopo’s Michael Denga Ramabulana Secondary School near Louis Trichardt pulled children out of class in response an alleged lack of desks, chairs and extra classrooms at the school.

According to the School Governing Body Chairperson Thomas Malema, the school’s 1000 learners share less than 12 classrooms. Malema also claimed that 100 students can share the same room, creating overcrowded conditions that he said were unhygienic.

“We are always tired as we are forced to attend classes standing as they is no furniture to sit on,” said Grade 10 learner Mashudu Muthambi. “We have to stand for hours, which make it impossible for most of us to concentrate on what the teachers say.”

“Those who are not so strong to stand for hours are forced to sit down on the dirty floor,” Muthambi told Health-e News.

Some parents said they began complaining about the school’s conditions in 2012. Last week, Malema said many felt pulling their children out of school was their only option.

“As parents, we felt that we had no other choice but to withdraw our children from the school for their own safety,” he said. “It is not healthy for children’s to be packed in one classroom like sardines”.

Following last week’s stay away by students, the Limpopo Department of Education delivered 250 of the 800 desks needed to the school Saturday. The Department has promised to drop off 500 more desks by Friday.

“There is a backlog in the department as many schools in the province are running short of classes,” Rasila said. “We are in the process of providing mobile classrooms and furniture to all schools where there is a need. (Michael Denga Ramabulana Secondary) is one of the schools that has been identified for this project”. – Health-e News.