One Northern Cape clinic recently spent months without a cleaner, forcing nurses to trade their stethoscopes for mops. Now, the Northern Cape Department of Health has stepped in to help. 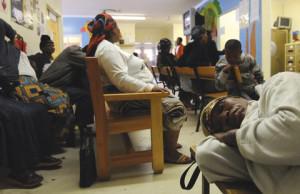 The Breipaal Clinic in Douglas, Northern Cape lost its clinic cleaner in August 2015 and what followed was not pretty, according to new mom Sherly Isaacs.

Isaacs and her young son attend the clinic frequently for check-ups and immunisations. She described the condition of the facility’s floor as “unbearable” and said she refuses to let her son crawl on the floor.

“I sit him on my lap all the time,” she said. “There are bloodstains on the floor – It is so unhygienic. I can’t let my baby crawl around and play in such conditions.”

In early April, Health-e News reported on the state of the clinic, where nurses had allegedly been forced to clean after-hours to keep the clinic in a useable state. Now, the Northern Cape Department of Health has finally filled the vacant cleaner position.

The recent appointment of cleaner Rijuaan Bacon has already made all the difference to already overworked nurses, according to patient Charlene September.

“(The clinic) is cleaner, and the staff does not seem as exhausted as they used to be,” she said. “It’s good to see that after we complained, that the department of health stepped in.

“It shows us they actually care,” she told OurHealth.

Bacon has worked as a cleaner at Cape Town’s Somerset Hospital as well as at Kimberley Provincial Hospital. He said he was grateful to take up the position at the Douglas clinic as it offered him and his children more stability. – Health-e News