Villages in Qwaqwa in the Free State, hit by drought in June 2015, are continuing to struggle severe water shortages.

Villagers are battling without water, risking their health by using dirty water and are spending huge amounts of time queuing for water that has to be brought in for them.

Maluti-A-Phofung Water told OurHealth that while their team is working hard to resolve this problem, water is still being distributed to residents by water trucks. 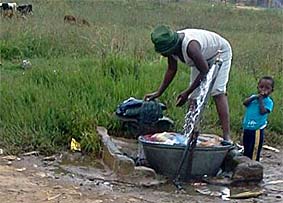 Various organisations and the municipality have been delivering water, even though Qwaqwa falls into the catchment area for the Vaal Water Scheme, and is close to Sterkfontein Dam, which is one of the biggest Vaal Dam feeders.

“We often go for days without water, and we sometimes end up using dirty water, which results in us getting sick or having health problems. We wait for water trucks to come from about 5am in the morning, and when it does come the water we get is not even enough to flush the toilets or to water our gardens – which some of us depend on for food,” said Palesa Mokoena from Mmakwane Village.

We often go for days without water, and we sometimes end up using dirty water, which results in us getting sick or having health problems.

Mpho Molelengoane, a teacher and a resident of Phuthaditjhaba in Qwaqwa, said “I have also been experiencing these severe water shortages. I have gone out in the cold to stand in the queues only for the truck to run out of water before I could be helped. I then waited in another queue for the second JoJo and as I got closer to the front the water ran out again. I was so furious, and angry that I had to go to school without taking a bath.”

According to Dikwankwetla Party leader Moeketsi Lebesa, poor water infrastructure management is the root cause of the water shortages in Qwaqwa and the municipal authorities are to blame.

Vusi Tshabalala, Mayor of Maluti-A-Phofung, said there were plans for the construction of a new catchment dam with pipelines. These were expected to take another three months to complete, and would cost R10 million.

Mineral and Resources Minister Mosebenzi Zwane said pipes were being laid to take water from Sterkfontein Dam to the Metsimatsho Dam and other areas.

He said work was being done to enlarge the capacity of dams serving the Qwaqwa area, which has grown significantly in population size.