The MEC of Department of Health in Limpopo province Dr Phophi Ramathuba has publicly condemned the actions of the Limpopo pastor alleged to be spraying insect repellant in the faces of his followers to heal them. 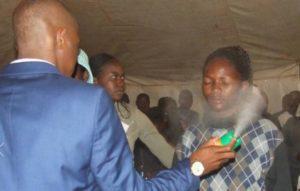 Ramathuba said that the acts of spraying Doom on the skin of worshippers might lead to severe health problems.

“This thing has to stop what this so-called prophet is doing is not healthy for our people and could be putting lives in danger. Something should be done urgently to stop him before people start getting sick,” said Dr Ramathuba.

“As the Health Department, we are aware of the prophet who is believed to be using a Doom to heal people, and we are worried as it may lead to serious health challenges in future. We are issuing a strong warning to the people to refrain from using items which could cause a major health hazard in the name of healing people.”

Limpopo prophet Lethebo Rabalago of Mount Zion General Assembly Church has been reported to be using Doom spray and petrol to heal his followers who are sick. The 24-year-old pastor sprays his worshippers during services – in an effort to ‘cure’ them. He has claimed he was instructed to do this by God. He claims his actions are not harmful, and none of his congregants have laid a complaint against him.

This thing has to stop what this so-called prophet is doing is not healthy for our people and could be putting lives in danger.

Dr Ramathuba said the Department of Health is currently in negotiations with various stakeholders in the province as they want to stop what prophet Lethebo Rabalago is doing before more harm is done to the people of Limpopo.

“We value the health of our people hence we are going to do all we can to stop what the so-called prophet is doing,” said Ramathuba.

Retailers Tiger Brands, manufacturers of Doom, said they were attempting to make contact with Rabalago to ask him to stop using the insecticide on people.

No one felt sick

Rabalago said that no one had been injured or felt sick during his prayer sessions, despite him having sprayed them with Doom. He has accused the media of spreading falsehoods about his church.

No action has been taken against Rabalago as no charges have been laid against him.

Elizabeth Meyer was first diagnosed with HIV in 2002, but has managed to keep the virus in check for many years and only started ARV treatment a couple of months ago. She is far more troubled by her diabetes and hypertension.

Obesity and diabetes are on the rise in Africa, reveals the first detailed analysis of these epidemics on the continent.