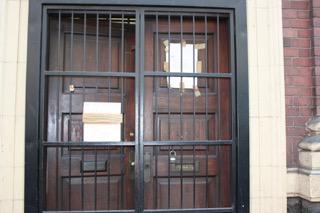 Jeppe Clinic – the government health facility shut down by the Gauteng Department of Health over Easter due to shoddy conditions – will not be re-opening next month as was promised.

The clinic was shut down for safety reasons after Health-e News reported on the leaking roof, mouldy walls and generally unhealthy conditions of the premises.

The clinic was to remain closed for five months for renovations, and was supposed to re-open at the end of this month. However, with little more than three weeks to go, it turns out that the renovations have not yet started.

While the work commissioned should have been almost complete, it turns out that contractors have not done a thing. Now Gauteng Department of Infrastructure Development MEC Jacob Mamabolo has pledged to take action against the officials and contractors who have failed to do their jobs.

Earlier this year the Gauteng Department of Health announced the temporary closure of Jeppe Clinic, stating that it would not re-open after the Easter long weekend and would remain closed until October 1 according to Gauteng Health MEC Gwen Ramokgopa.

The clinic shut down has been a serious inconvenience for about 2 500 patients a month, all of which have been diverted to the Hillbrow Community Health Centre.

When he was informed by Health-e News this week that the refurbishing had not yet started, he responded angrily, saying he would check on who was not doing their job.

Mamabolo said the refurbishing of the clinic would cost R396 000, and would be finished by the end of this month. But when he was informed by Health-e News this week that the refurbishing had not yet started, he responded angrily, saying he would check on who was not doing their job.

“I have started from yesterday to suspend officials and contractors who are not doing their job,” he said on Tuesday adding that he planned to take action against every single person at fault.

Mamabolo made the first of an expected series of unannounced site visits to crack down on poor performance.

“As government we must be accountable and we must not be used as an outlet for poor performance, poor quality, corruption and waste. We must ensure that every cent entrusted to us is spent in the most responsible, ethical and accountable manner,” he said.

Asked when the renovations are likely to start and when the clinic would re-open, Mamabolo said an investigation into what went wrong was underway. An announcement would be made once there were findings, and only then, “based on real facts”, would an announcement be made.

“At this point, there will be no speculation on the next steps,” Mamabolo said.