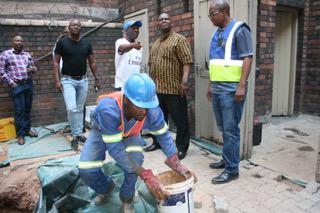 Revelations that Jeppe Clinic – closed down by the Gauteng Health Department in April for urgent renovations – may not be ready to re-open on October 1 have sparked high level action.

Health-e News reported that the clinic was shut down for six months because of the shocking state of the building – mildew on the walls, a leaky roof, and other unacceptable problems.

For the past few months, the 2 500 patients who visit the clinic each month have been diverted to Hillbrow Clinic as the Jeppe Clinic was supposed to be undergoing extensive repairs.

However, when Health-e News visited the dilapidated clinic in early September it was clear that the repair work – supposed to be in the end stages – had not even started.

Officials contacted for comment all asked for time to investigate, with the Gauteng Health Department and the Department of Infrastructure Development both shifting the blame.

But then the Gauteng MEC for Department of Infrastructure Development Jacob Mamabolo recently stepped in and decided to pay a surprise visit to the site himself. This came soon after workers had frantically started the renovations – five months after the clinic was closed down and less than a month before the scheduled completion date.

Mamabolo said It was clear to him that there were major problems throughout the entire building because of aging infrastructure.

“This is an old building located in residential flats, and also in a business environment,” he said, adding that various activities going on around the building and in neighbouring buildings were contributing to the decay.

Mamabolo said the building was extremely old, and the engineering skills used when it was originally built did not meet modern construction standards.

“What we are dealing with here is a very serious problem of a building that has been rotting over the years,” he said.

According to Mamabolo, the contractors started working at the clinic only two weeks ago because they had had to wait for initial inspections to be done by engineers and Infrastructure Development officials before any actual renovations could begin.

“I must say that I am very impressed with the work of Infrastructure Development officials and by their level of knowledge and expertise,” he said during the site visit, adding that he had been given a positive impression by the contractors undertaking the work.

“The reason I came here was to check the contractor’s level of capability, readiness and whether they understand the problems.”

Mamabolo said he believed the contractor was in full control of the project and that the clinic would soon be properly renovated and repaired.

Mamabolo said he believed the contractor was in full control of the project and that the clinic would soon be properly renovated and repaired.

Asked if he believed the clinic would be ready to re-open on October 1 as originally promised, Mamabolo said: “The contractor says that the date that we have announced – October 1 – is correct, and they will keep to that date.”

However, after touring the site and seeing the scope of work that still had to be completed, Mamabolo was sympathetic and open to extending the finish date by “a week or two”.

“But it will be very good if they finish within the time that they have stipulated,” he said.

Mamabolo said he understood the impact of closing down Jeppe Clinic for so many months as it was situated in the Joburg CBD, and had many patients relying on it.

“But we have to be realistic, because we are dealing with a very serious problem here,” he said. He assured the public that work on the premises was ongoing and that officials were committed to ensuring that the clinic would re-open as soon as possible.

“We are all set, and are now back to the original timeline that we have gave. I am going to monitor the performance of the contractor,” Mamabolo said, hopeful that Jeppe Clinic will indeed re-open on October 1. He said he was sure that the clinic would be back to being fully operational by the second week of October.

He said that no action needed to be taken against anyone as the renovations had started, and the contractor – Chanterick Trading(Pty) Ltd – was on site and promising to be done by their deadline.

Mamabolo however still committed to visiting the site every week to keep an eye on the progress being made.