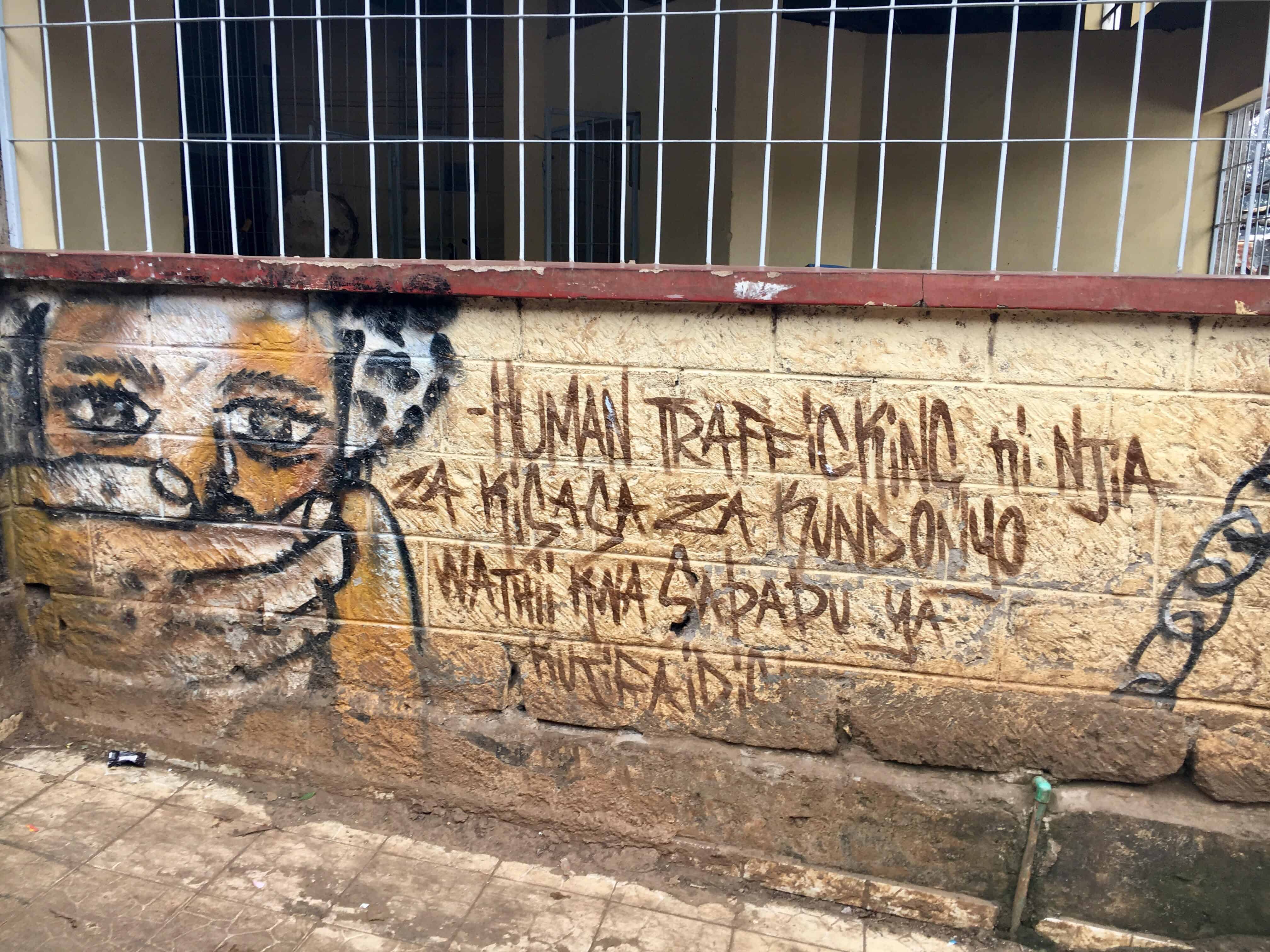 Kenyan youth are being trafficked, largely to Qatar, under false promises of job opportunities. A grassroots youth group in Mathare is coming together to find alternatives.

Kevin Auma and his friends weave between the corrugated iron houses of Mathare, Kenya’s second largest “slum” in the capital city of Nairobi. They hop over the slippery rocks wet with water from the Nairobi river that runs through Mathare like a lazy, shining snake. Some stop briefly at the chapati stands, others to spy on a game of pool.

On the wall of a public toilet, an artist has scrawled graffiti: “Human trafficking is a modern way of getting cash from people for self benefit” – with an image of a woman’s face, her mouth covered by a hand as tears slip from either eye.

Eventually, they emerge at their community shelter. The word “Wasafy”, meaning “clean” in KiSwahili, is painted on the door. This is where Auma and the Wasafy youth group meet every week. Here, they pull together money, resources and support to provide the young men with financial alternatives, and in turn lure them away from the clutches of human trafficking that grip the community.

According to the United Nations Office on Drugs and Crime, exploitation through trafficking includes, at minimum, “sexual exploitation, forced labour or services, slavery, or practices similar to slavery, servitude or the removal of organs”.

Although extensive international data on trafficking is hard to find, specifically as the nature of trafficking is subversive, the Migration Data Portal reported that an estimated 40 million people were victims of modern slavery on any given day in 2016. Of these an estimated 25 million were in forced labour, and another 15 million in forced marriages. In Mathare, this type of exploitation is rife.

“Ninety percent of us are either potential trafficking victims, or traffickers,” says Auma, speaking of the high level of desperation and unemployment in the community.

His core group of 22 young men are reformed criminals, he explains, who were lured into crime by hunger and poverty. Now, after the chief of the community donated land to Wasafy, they work with organisations such as HAART to provide information to potential victims. One of their mottos is “Slavery did not end, it evolved”.

But when Auma says “we cannot eat information” his comment emphasises the fact that this alone is not enough – hence the formation of Wasafy to educate but also empower through financial alternatives.

“These are the names of our members,” says Auma, pointing at a list inside his Wasafy logbook.

“Every week they donate 50 Kenyan Shillings to Wasafy. This money is then used to organise vocational trainings, talks, or even small grants to start our own businesses.”

He uses the example of one Wasafy member who was given money to start a fruit stand. Now, each week, some of his profits go back into the organisation.

Wasafy organises training and talks from NGOs, mechanics, and catering companies so that the members can acquire news skills.

“Now, when my boys hear the words Qatar, they are not interested,” he says.

“Yesterday a child was killed in the community for stealing food. We just had his funeral. The parents often put pressure on the kids to help provide.”

His story speaks to the way parents are sometimes complicit in the trafficking of their children. There is often the hope that if their children find opportunities, it will trickle down to the whole family and lift them out of a life of poverty too.

“My cousin was trafficked,” shares one of the young mothers, bouncing her baby on her lap.

“She was kept in Lebanon and then in Saudi Arabia for five years. Her leg was badly broken and she had to spend all the money she had on medical expenses.”

Wasafy and HAART share as much information as they can with the community to prevent such occurrences. Sometimes this comes in the form of WhatsApp videos they have accessed about trafficked victims being tortured to try to inform potential victims of the reality they may face.

“When there are no gatekeepers, organisations such as these have a strong influence over youth, especially considering Wasafy’s members previous engagement in illegal activities,” says Patrick Migiro, a Human Rights Officer at the Kenya National Commission on Human Rights.

“As reformists, they command a section in society through which they can get their messages to vulnerable groups of society.”

When the term “human trafficking” is not understood even by law enforcement, perpetrators are prosecuted on the grounds of sexual abuse only, she explains, emphasising the need for education around trafficking.

HAART also gave the example of once having to print out the laws surrounding trafficking to give to a police officer. Without this, the officer was not clear which law could be used to prosecute traffickers. More stories are shared about perpetrators collaborating with police, or police being paid by the community to conduct raids on child brothels.

“This is why slums are targeted,” adds Peter. “People don’t know their rights, are and jobless and less educated. Sometimes they don’t inform families, they just disappear.”

The Chief of Mathare stands up to contribute.

“This is not a local issue, it is an international one. Our economic situation is at the heart of this problem. All we can do is empower them, train them, open their eyes.”

This rationale is at the core of the chief’s collaboration with Wasafy.

“We found ourselves here in Mathare,” he concludes.

“Our biggest challenge is to get out of here.”

As we leave Wasafy’s headquarters behind us, one of Wasafy’s members approaches me to ask about South Africa.

“Are there opportunities there? I want to come to South Africa badly.”

His comment speaks to the trafficker’s more powerful weapon: the unrelenting dream for a better life. DM

Kim Harrisberg was in Kenya for the Unveil the Hidden Presence Lab run by Thomson Reuters and GIZ. This lab brought journalists, activists and policy planners together to tackle human trafficking issues worldwide. An earlier version of this article was published in Daily Maverick.