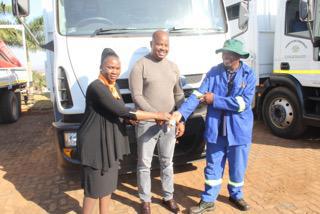 LIMPOPO – Vhembe District Municipality, responsible for providing water services to the entire district, appears to have lost over R 300 million which was invested with the embattled VBS Mutual Bank.

The much anticipated clean drinking water supply promised to several villages looks set to fail. The residents of Dididi village, outside of Thohoyandou live 2kms from the banks of the multi-million-rand Nandoni Dam yet remain without access to clean drinking water despite years of ongoing promises made to them since the dam was constructed.

Dididi and other neighbouring villages such as Mulenzhe and Makovha have never enjoyed the benefits of residing at the banks of Nandoni Dam, which was built to supply water to more than 100 000 people from more than 20 villages within the Vhembe district.

The lack of proper water supply into those villages has resulted in the residents relying on unpurified water from the Luvuvhu River. Local residents say that it hurts them knowing that Nandoni is responsible for bulk water supply to various areas situated far away from the dam, while they remain without water.

Concerned Dididi resident, Thomas Magosha said: “We have already lost hope that one day we will get water supply from the dam which surrounds our villages. We have been raising the issues with the district municipality for years, but nothing is being done to ensure that we receive water. It is painful seeing water flowing into the dam each day, knowing that you’re not benefiting at all from the water so close to your home.”

Vhembe district mayor, Florence Radzilani, took office two years ago and vowed that water supply would be her number one priority. Now she has been implicated in the VBS scandal.

“When the dam was built years ago, we thought that the water problems in the village would soon be a thing of the past. But I guess that we were all wrong, as years after the completion of the dam our water woes still continue. There is nothing we can do as it’s all in the hands of the authorities,” said Magosha.

Residents in the district have since called for the removal of Radzilani as Mayor. Spokesperson for the Vhembe District Municipality, Matodzi Ralushai could not explain why villagers from Dididi and other villages are not getting water yet and promised to investigate why.